Continuing the third and final day of this road trip down memory lane, if you’d like to catch up on the first two days, click here for Day One and click here for Day Two.  These links will open on new pages so you can easily come back here when you’ve finished reading.

In Gold Beach, Oregon, the morning dawns bright, and completely fogged in.  The bridge outside our window the evening before (see this photo of the bridge taken on Day Two)

has disappeared into a thick layer of low clouds, hiding everything from view – the Rogue River silently running below the bridge, the shoreline on the other side with its houses all lined up, the wonderful Oregon Coast that I’d heard so much about and was looking forward to seeing in person.  I poked around the motel room, wasting time, waiting for the fog to lift, and all I got for my efforts was more fog.  The low clouds continued to settle in even lower.  I decided we’d move on anyway, and just hold out hope that the onshore breezes would start early in the day and blow the clouds out.

What really happened was just the opposite – the road stayed fogged in, the coast with all the fantastic rock formations I’d heard so much about was invisible, the on-coming cars had their headlights on for visibility, as did I, and we drove slower than usual to make sure we stayed safe.  We continued northward through the little towns that I’d been told were so picturesque and quaint, only to see fog and more fog, low clouds and more low clouds.  We were approaching Port Orford, a place the locals have dubbed “Port Awful” simply because the coast is so often fogged in and the view, the weather, is awful.  And yes, it was still fogged in.  Hmmm.  I began to wonder if we’d ever see the sun again.  Then, as if by magic, the sky brilliantly cleared up into a gorgeous, cloudless blue; the highway had turned inland where the moisture in the air keeps everything hydrated and green, so our views now were of trees and the coast hills.

r the cranberry bogs that surround it.  Little did I know that Bandon has had so much more history than just that small fruit so popular at Christmas time!  I decided it was time for another break so I parked the Montero and UHaul trailer on the street, right in front of the door to the Bandon Historical Museum, and paid two bucks to spend an hour amongst the fairly extensive collections of the residents.  What an amazing wealth of information about the logging industry, the agriculture of the area, the local fishing industry, and the big fire of 1936 that nearly burned down the entire town.  I was fascinated by the history of the women in logging, and that the trees were called shes!  And it was only two bucks – such a deal!  If you have an extra hour (or more), it is well worth spending the time.

We continued driving north, knowing that we were getting closer and closer to our final destination, where we’d be unloading the little UHaul trailer and beginning the fix-up of the little 10-footer that the three of us, Dinah Dog, Louise the Cat, and me, would be living in when we took off on a road trip adventure across the country. 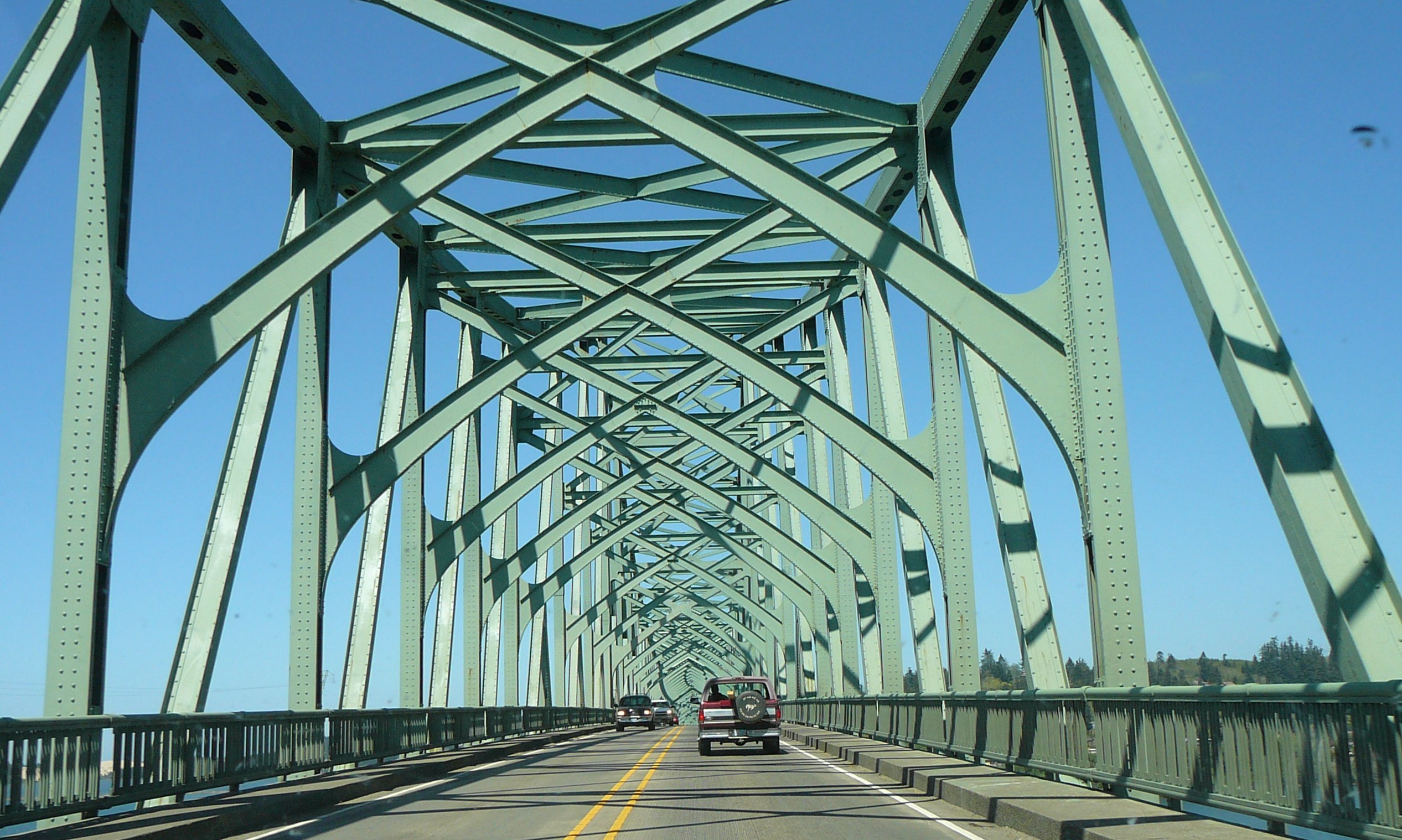 Even though the plan is to keep driving, checking out hidden America, meeting new friends, seeing things we’ve never seen before, since there really is no plan, we could end up loving Montana enough to stay for awhile.  Or maybe we’ll find that the coast of Texas is beautiful enough to stop driving for a month or two or ten.  Who knows?  I certainly don’t!

So, I kept driving, and driving, and driving, stopping for gas, stopping to stretch our legs, stopping for Dinah’s pee and poop breaks.  Louise the Cat found a place to curl up in and she stayed pretty well hidden for hours.  We pulled into a little marina in Coos Bay, with lots of boats, some deserted picnic areas, no other people around, and took a break for awhile, just drinking in the wonderful blue sky, the pleasant temperatures, the salt smell in the air, the seagulls chattering away as they flew around looking for a bite to eat.  We rested our legs, sat in the sun, poked around

the edges of the water, took pictures of a couple of Canada geese sharing our space.  And then it was time to move on, so Dinah and I climbed back into the Montero and headed back out to the highway.

The drive became a mile-after-mile repeat of green hills, turn-offs for dunes and lighthouses, tall trees, little bitty towns so small if you blinked, you’d miss them, state park after state park, tiny airports, and north of Florence, some very nice ocean views, where the waves crashed up against the shore.  By the time we arrived in Newport, I was tired and knew it was time to make a decision – it was early afternoon and we could spend another night on the road or we could head inland and leave the remainder of Highway 101 for another day.  We took another break where Dinah Dog could get out and stretch her legs while I checked my email on my iPhone.

Guess what?  I had a message from the trucker I’d met the afternoon before.  We exchanged a few more messages and agreed to meet up that evening for a bite to eat in Aurora at the truck stop where he was parked.

So we turned east at Newport, driving through the inland coastal area, passing through trees, meeting greenery at every turn.  Oregon is indeed a beautiful place; the almost constant rain, drizzle, sprinkles keep it green and lush with ferns and flowers, trees and bushes.  Once we had arrived at Interstate 5 in Albany and headed north, it began to feel like we were entering the home stretch, the continuing Freedom, the call of the open road louder in my ears than anything else.  Freedom means so many different things to each of us; to me, it means just being me.  Freedom is knowing that I’m perfect the way I am, that every part of me is the way it’s supposed to be, that I can be who I want to be, that I alone am responsible for any changes I want to make.  Channeling Marlo Thomas here: I’m free to be me!

With the sounds of Freedom shouting in my head, we got off the freeway at Aurora, where Mike the Trucker was waiting to have dinner with me.  After pulling into the truck parking area and locating his truck, we walked over and sat down in the almost deserted restaurant.  Over plates of salad bar and bowls of soup, we chatted and talked, discovering things we had in common (both he and my son worked at the same submarine base in northern California, during the same time period!), things that were different (he’s a code enforcement case; I was a code enforcement officer); finding out that his dream floats (he just bought a 22′ sail boat) and mine has wheels (my current home sweet home is a vintage 1965 ten-foot travel trailer).  It was a nice end to the day, sitting and talking with another new friend.

Realizing it was now past 11 pm, and feeling like I was fading fast, I took my leave from Mike and headed down the road a couple of miles, to Canby,

where the 10-footer was parked in the workshop of my friends, Seth and Tricia, and where we would “home-base” for a few weeks while I got the little guy spiffed into shape to live in and safe to travel down the road.

The trip down memory lane on Highway 101 had come to an end.  Filled with wonderful reminiscing about so many amazing, fantastic trips up and down 101 over the years, it felt a little sad to finally draw this trip to a close. But just knowing that my own personal freedom had come back to stay and would be with me forever, made it easy to settle in to the little house in Canby and start to get my head around the big job ahead. There is much work to do and it is time to move forward with it and get this next road trip show on the road.  Who knows, perhaps we’ll pick the 101 back up in Newport and complete the drive to the end.

My wish for all of us is that we be free, truly free, and that we experience our own Freedom completely, for that’s where the knowing is.  It’s in our Freedom.

“True freedom is always spiritual. It has something to do with your innermost being, which cannot be chained, handcuffed, or put into a jail.”

— OSHO, Freedom: The Courage to Be Yourself