Episode 4: A little mini-series on what to do in Las Vegas besides gambling – and there’s a lot!

Ready for a little water action in the desert? A little bit of a cool-down in the summer?

Okay, maybe a LOT of a cool-down?

Some relaxation with the gently lapping current of a lazy river? A place to take the kids for some outdoor activity to run off the pent-up energy? A chance to fly down a slide into a pool of cool water?

Try a day at Cowabunga Bay, the water park located in nearby Henderson. It’s sure to raise your flagging worn-out spirits after too many indoor hours losing too many dollars at too many slot machines and tables, and crawling through too many buffets, eating too many high-calorie dishes and too many sweet pastries and desserts. 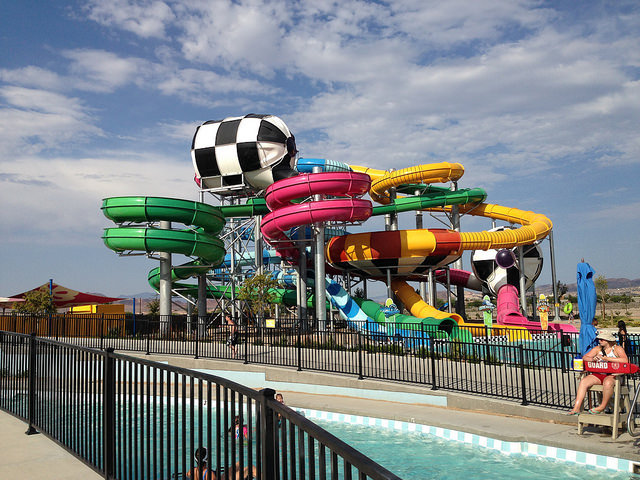 I’d never been to a water park in my life. Not that I didn’t want to go; the opportunity just never reared up and it was never a priority on the list of adventures to be had. Oh sure, the idea of blasting down a slide filled with water, crashing into a pool of cool, refreshing liquid stuff, and rushing off to do it again appealed to me because, well, I’m a huge fan of roller coasters and water – putting the two together seemed like heaven on earth; but for some reason, I just never made it to a water park.

So when my cousin, Tracie, made the suggestion to go, I was in. The slides were out, though, because of my sprained ankle, but some leisurely time on the Lazy River sounded wonderful. Besides, it was 115 degrees (46C) in the shade and I was one hot cookie, even with the air conditioning in the house. 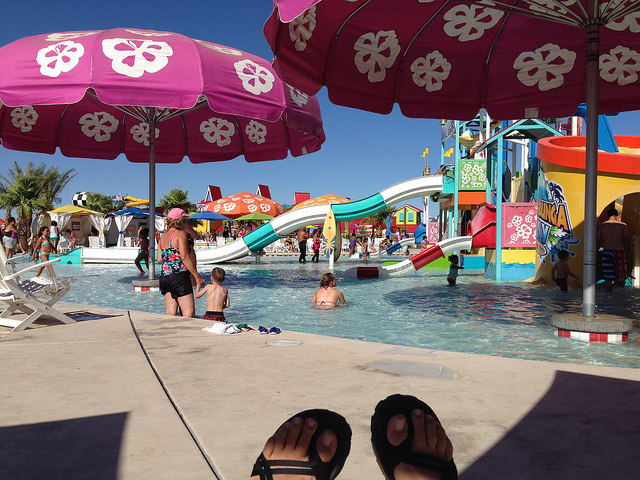 Off we went, Tracie, me, and her two toddler foster kids, for the 4-7 PM special rate hours – only $20 to get in (normal entrance fee is about $28 for the entire day). But I love being a senior person these days – my ticket was only $10! Such a deal! And that ten bucks is good for all day!

We spent that first day at the kids’ area, with its smaller slides and kid-related water features, and in the lazy river, floating on tubes, cruising in the current, just relaxing. But after Tracie took the kids back to the kids’ area, I spent some time in the lazy river by myself, using the water as a therapy for my ankle, kicking my feet and flexing my legs. To say I was hooked on water parks would have been an understatement.

There are plenty of chairs and lounges where you can take a sun break. A snack bar where you can get everything from pizza to chicken wings is nearby, as well as vendors that sell shaved ice and Dippin’ Dots, those wonderful frozen little round balls of tasty goodness (can you tell I like Dippin’ Dots?). In addition to soda and iced tea, wine and beer can also be purchased.  There’s a gift shop where you can pick up more sun screen, a pair of flip flops or a Cowabunga Bay t-shirt, and lockers where you can store your extra stuff. 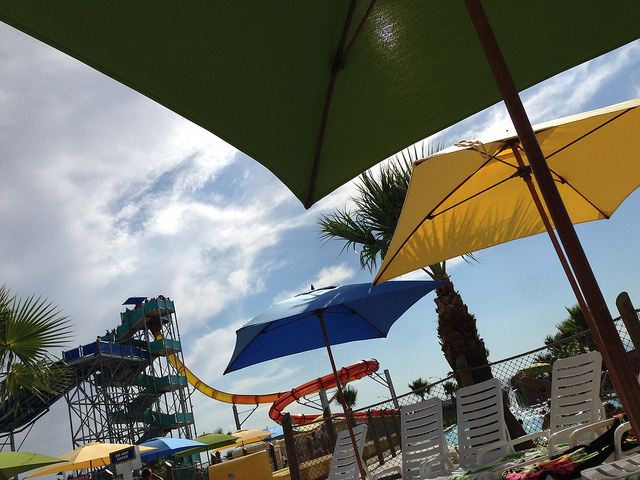 On our way out of the park that first day, I stopped by the administrative offices to inquire about season passes and discovered that a senior pass, covering all days the park is open and including all open hours, was only $50 and they would apply the $10

I’d already paid for the day. I was in! Cheap water therapy! Yay!

I suppose, without even really thinking about it, I’ve always thought of water parks as water slides, places meant for young people with the boundless energy and painless knee joints who are able to easily climb those seven-story flights of stairs, not knowing (and not doing any further research into it) that there were other things to experience like the lazy river and the wave pool (which is a re-creation of the experience one would have at the beach where the waves are, only without the sand). Now, I think I’ll be checking out those water parks wherever I travel, if for nothing else than that lazy river, that relaxing, refreshing, cooling, lazy river. Oh yeah, baby, bring it on 🙂

Especially if they have a senior rate… hehehe. 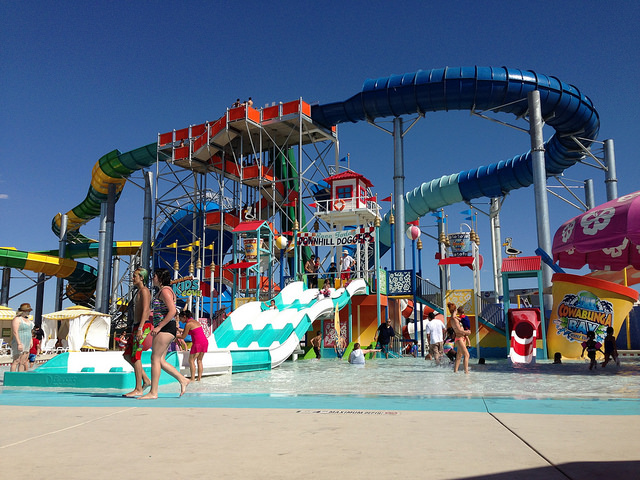 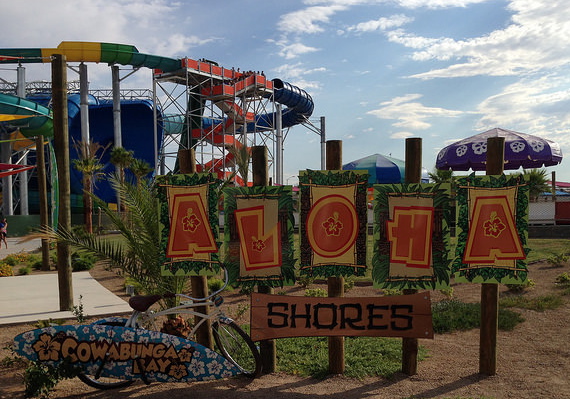 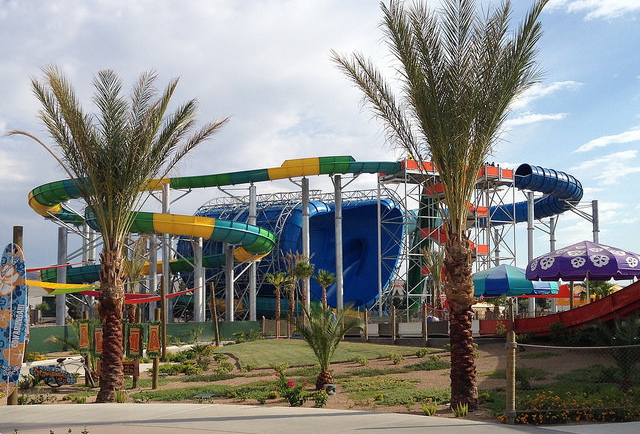 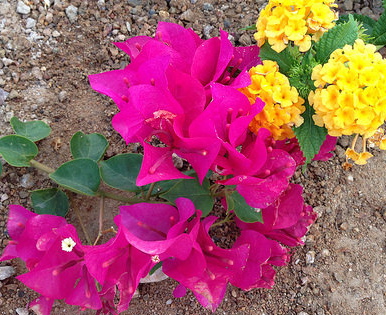 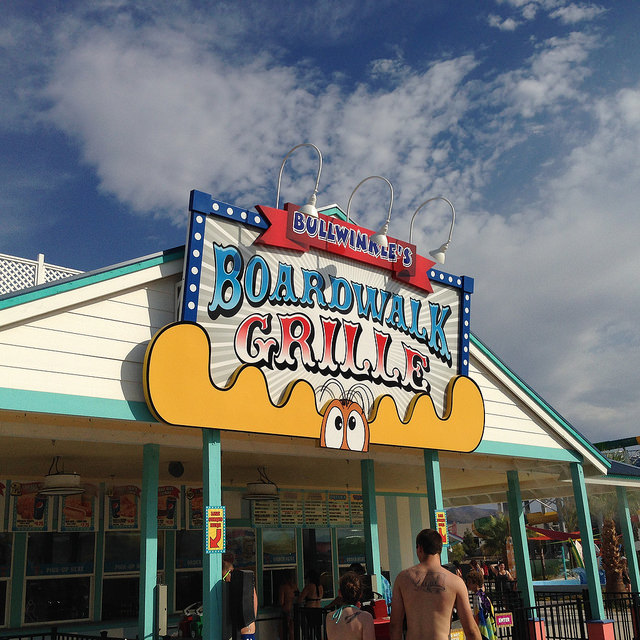