As I sit in my little trailer, I can hear the band playing as loud as if it’s just a hundred feet up the road from me.  The words to the song Kansas City have been altered to reflect where we are: Slab City, California! 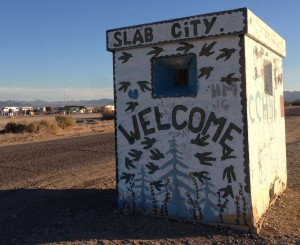 Every Saturday night, starting at dusk, the band strikes up, and sings, plays, and generally has fun for several hours.  I didn’t know this when they started the music, of course… which is too bad because as it turns out, they really were just about 100 yards up the dirt road from where I’m parked.  I thought they were much, much farther away and that the sound was just traveling very clearly across the desert – otherwise, I would have grabbed my flashlight and joined the crowd.  Since I’m leaving before the next Saturday rolls around, I’ll have to join them on the next go-round.

Slab City is in a area east of Los Angeles, just east of the Salton Sea, where people can come and stay for free.  Pitch a tent, sleep 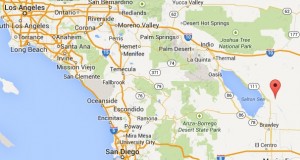 in the car, come in a van, tow in a trailer, or cruise in in a giant big rig… or any other form of living space you can think of or picture in your wildest imagination.  It’s been going on for years.  Some of the people here look like they’ve been parked here since the beginning of time, or at least, since the beginning of The Slabs, as it’s known locally.  It’s sometimes gotten a bad rap via news reports over the years for its drug users, thieves, criminals, runners-from-the-law, and whatever other unsavory characters they’ve announced have lived and are living here, and if I was honest with you all,   I’d say there was a little guy sitting on my shoulder as I was heading this direction, whispering in my ear, reminding me of all the stuff I’ve read, all the bad news, all the “unsavory characters” I might run into.  I ignored the little guy.  I kept driving towards The Slabs.  (The little guy lounging on my other shoulder kept reminding me that I’m familiar with the way the media in this country files “reports” on this sort of thing, so I felt fairly safe in ignoring their “reporting.”)

Taking the turn-off out of Niland, in the far-off distance, I could see Salvation Mountain.  It looks different than the surrounding brown hills – it’s 50 feet high, 150 feet long, and the dirt is painted white, with lots of other bright colorful colors used to make designs on the white-painted mountain.  The closer one gets, the more colorful it is.  The man who started this project back in the 1980s, Leonard Knight, died a few days before I arrived here.  Even though he’s been in a care facility in San Diego for the past couple of years, the work he started has continued on. 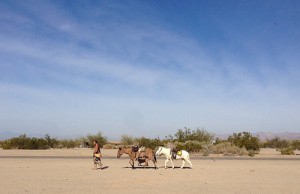 People still bring their used paint cans with left-over paint in them for the Salvation Mountain volunteers to keep up with what Leonard started.  It’s an amazing labor of love.

I drove through the main streets of Slab City, checking it out, looking for a place I could get my Li’l Homey in to safely without dragging her low parts in the dirt, and I settle on a large area not too far from Salvation Mountain – in fact, if nobody is parked between me and it, I can see the cross on top of the hill from where I sit outside reading my book.  I stayed here  in this spot for almost a week.  Never once did I feel threatened or unsafe, even though it was a very busy 3-day holiday weekend after I arrived.

(And yes, there really are slabs at Slab City – check it out here!)

People came from all over to pay tribute to Leonard and of course, the desert drivers (the ATVs, Jeeps, etc.) came in during the days, passing right on by those of us parked in this area.  A local resident, someone who’s been coming to The Slabs for over twenty years, stopped by one day to chitchat and introduce himself.  About my own age, we talked about places we’d been 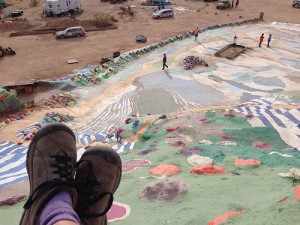 , things we’d seen, the weather that day.  Everybody was friendly, no matter where I went, and/or they kept to themselves.  I felt like I was “at home” – a place that’s comfortable and cozy, warm and friendly.  I could have pulled Li’l Homey into a more permanent location and stayed forever.  Well, at least until it started getting hot, then I’d be outta there.  It’s the advantage of taking your home with you wherever you go!

The desert sunsets are usually amazingly colorful with bright oranges, pinks, and reds.  On occasion, there’s a cloud cover in the west that cools everything down a bit but it also interferes with the brightly colored sunsets.  I hope you stay long enough to see at least one – it’s a show put on just for us from Mother Nature herself.  You won’t want to miss it! 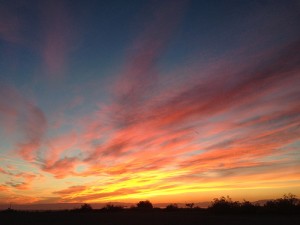 If you’re planning on going, or think you’d like to but have been listening to the media, or you just want some place to go where it’s free and there are other people not too far away (but far enough, if you know what I mean), even if they’re quite a ways away, try it out. 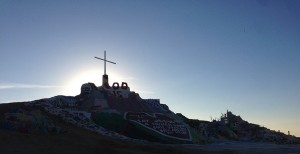 It’s not for everyone, I’m sure,  but no matter who you are, what kind of rig you have, or how long you want to stay, you’ll be accepted as one of the Slabbers.  (There’s a good-sized city just a half-hour drive away so you’re really not very far away from “civilization.”)  Take your sense of adventure with you, climb to the top of Salvation Mountain, and then spend a few days in your designated campsite just relaxing in the warm southwest desert-y air.  Your spirit will thank you for it.

If you’re not a camper and you live in the Southern California area, you might just want to take a drive out to see Leonard Knight’s handiwork.  It’s truly a marvel to see what one man can start and accomplish when he sets his mind to it.  Leonard, the world will miss you but your Mountain will live on forever.