Today would have been my little brother’s 58th birthday.

That’s him on the right in the glasses, in a photo taken when he was 10 years old. 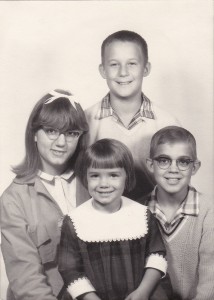 Artie died of a self-administered drug overdose just 2 weeks before his 40th birthday.

He was always a gentle soul, sensitive to the outside world around him, even as a little kid. Instead of building his own treehouse, he helped me build mine to be the biggest, bestest in the neighborhood.  He was creative, kind, gifted, and resourceful.  He once sent me a small box of tiny beads he’d found somewhere under one of the bridges he lived under for fifteen years in Portland, Oregon, saying it was a box of creativity just waiting to happen.  It was just so “him” to say something like that.  Instead of making something for me out of the beads, like a bracelet, that would reflect something he liked, thinking I would like it, too, he wanted me to make my own “something” out of it.  Thoughtful.  Artie was that, too.

The years have allowed me to focus on the amazing person he was when he was alive on Planet Earth, even though I also know he was what I called at the time “a tortured soul.”  I believe he now has, and is, at peace.

I’ve often wondered what would have become of him had he not died when he did.  I’ve come to believe we choose the path our lives take while we’re here, and while the one he chose for himself was different than any path any of the rest of us would have chosen for him, it was his choice to live his life path as he chose to live it.  And he did.

I love you, little brother.  Thanks for choosing to be a part of my life.  You’ll always be a shining star in my book!

Thanks to my cousin, Tracie, for the photo – she found it somewhere recently and I got to be the recipient of an awesome treasure.  I have so few pics from my growing-up years and this is such a great pic of the four of us siblings – it was taken in early 1967. Tracie, you rock!

10 thoughts on “My Little Brother, Artie”