I haven’t posted much these past months…. well, actually I’ve only posted twice since the beginning of last July. I’m on a mission to fix that.  I hope you’ll all hang in there with me!

I left the Pacific Northwest a bit late in the year. I usually try to get out of the rainy weather long before it sets in, but this year, I was delayed by a wrist surgery to remove the plates that were installed two years before, and by helping a friend out with the recovery of her cat who had a femoral head ostectomy (the removal of the head or ball part of his left femur or thigh bone)… and my wrist surgery was delayed by the lack of coordination between my new medicare advantage plan and the cardiologist and the orthopedic surgeon. By the time all the delays were said and done, it was time for the holidays and of course, I couldn’t leave before celebrating Christmas and New Year’s. Right? 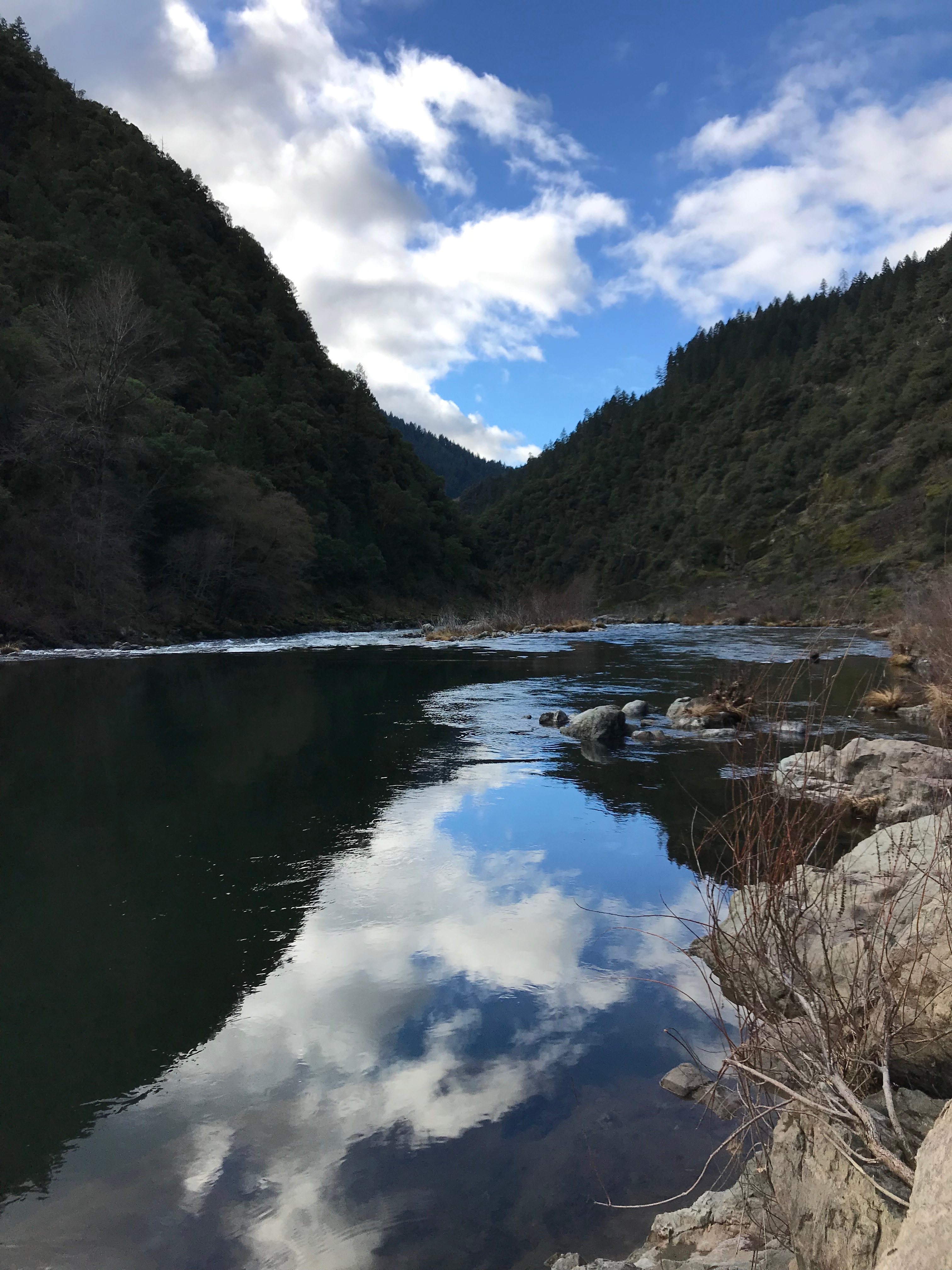 I finally left Oregon on January 2nd, only to “break down” in Roseburg during my first gas stop, two hundred miles south. I was directed to a fabulous mechanic near the gas station by the man who was pumping my gas (Oregon is one of two states in the US that pumps your gasoline for you) and after having my vehicle towed into his shop, I spent the next few days visiting a long-time friend (you know they’re a good friend when you call from an hour’s drive up the road and ask if you can spend the next 4-5+ days with them while your car is getting repaired). We ate great food, made a beautiful and wonderful trip along the river near her house, laughed hysterically with her friends while playing Cards Against Humanity, drank wine and hard cider, talked to her chickens who are on a winter hiatus from laying eggs, petted her silly and delightful cats, watched old movies, cruised around Grants Pass, and then ate some more great food. Nothing quite like an unexpected vacation to take your mind off the broken-down car!

I ended up dodging a huge bullet, however, when it was discovered that the major repair first thought necessary turned out to be “only” a thermostat – $250 instead of $1600. Big huge sigh of relief! I dragged out my emergency credit card and called it good.

After spending the next three days driving south down Interstate 5 in the very windy, pouring-down rain, I finally arrived in Quartzsite, Arizona. In the rain. Yes! It was pouring rain in the desert, too! I awoke the next morning wondering why my arms hurt so much… all those miles behind the wheel trying to keep my car on the road in the wind and rain made my arms and hands ache like some Mac truck had run over them!

From January 11th to the 24th, I was at the Rubber Tramp Rendezvous (RTR) and the first-ever Women’s RTR, a get-together of nomads, van-dwellers, huge Class A motorhomes, converted step vans, plain ol’ vans and cars, tents, truck campers, SUVs, trailers, Class B van conversions, old Class Cs nobody else wanted, and whatever other thing someone may be sleeping in for the night. I’ve been going to this gathering of people getting together outside of Quartzsite since 2014 when I first went looking for what I thought was going to be my tribe, my community, my fellow nomads, my like-minded people. I had “found” Bob Wells of cheaprvliving.com on the internet in 2012 after I’d been houseless for several years and was looking for others who were in the same position, trying to live without a sticks ‘n bricks home. The first year I went, there were maybe seventy-five people there. Maybe. This year, the estimates are well over 3,000 people. Or maybe that’s 3,000 rigs. I don’t know. I just know that it is now a huge gathering of people, many of whom are not living on the road but are interested in maybe some day living the nomad life-style and/or how to live a more minimalistic life now; it’s become quite diverse from its first inception and Bob Wells has become quite the guru to those who are looking for an alternative life, for something other than the 9-5, for people who are doing the same thing as they are.

After the RTR ended, I continued on to the Kofa National Wildlife Refuge, where I met up with friends who were camping beneath the mountain where Palm Canyon is located. Although I didn’t hike up there on this trip, others did and attested to the fact that it’s a steep and grueling climb up to the palms. Maybe some day I’ll give it a try. The sunsets and sunrises are spectacular, and the quiet and peacefulness of the desert are intoxicating. Sharing food with friends, listening to the sound of my friend Atli’s new crystal bowls, sitting in the desert watching the chollas grow, quiet conversations around a campfire, all added up to some much needed downtime for my mind and body.

I continued the mental and physical respite by heading down to Mittry Lake which is about 15 miles north of the city of Yuma, AZ. Mittry is also a wildlife refuge and this time of year, the snowy egrets are everywhere. The lake always has a bazillion coots, as well as other ducks, an occasional great blue heron, and lots of humming birds. Boats are popular with the fishermen (never saw a fisherwoman) and the lake is a good place to kayak or canoe as it’s relatively calm on the water and there are many little inlets to explore.

Onward to Pilot Knob and then to American Girl Mine Rd. where boondocking, or dispersed camping as it’s officially called, are a way of life. Just you and your rig – you bring everything else with you. There’s nothing out there except desert, ironwood trees, palo verdes, sand, rocks, an occasional cactus, and another rig parked out there on the flatland. I rearranged the interior of my vehicle, threw things away, donated other things to the Salvation Army in Yuma, cooked some of the food I’ve been carrying around, brewed lots of tea, made amazingly good espresso with my little Wacao, took photos of sunsets and hummingbirds, waved at people walking by, read books, watched Grace and Frankie on Netflix, charged my phone with my little backpacking solar panel, and reorganized again and again.

In the past couple of weeks, I’ve certainly kept busy by taking advantage of the things Yuma has had to offer its residents and visitors alike: I’ve gone to the Three Rivers Renaissance Faire where pirates, faeries, maidens and knights all congregated. I’ve been to a bunch of movies – thanks to my Movie Pass, I can go every day of the month for a single charge of $9.95 a month (the best find ever! Thanks, Alicia!). Of course, I also stopped at In-N-Out for an animal-style cheeseburger. Of course! I’ve been to Los Algodones, Mexico for shrimp tacos and dulce de leche. Tomorrow, I’m going to the Geocaching Mega Event here in Yuma where over a thousand geocachers will get together and have goecaching-related fun, including finding special caches set up just for this event, eat food (always with the food!), meet up with cachers from all over the country, maybe the world, and enjoy an almost perfect 80 degree day at a park by the Colorado River. I also will be headed back to Algodones again next week to buy my prescriptions over the counter, get adjusted by my wonderful chiropractor, and of course, have another shrimp taco or two.

Oh yes – there was also a beautiful eclipse of the super blue moon at the end of January. No place better to see it from than the desert, although as the sun began to rise, the power lines and other vehicles also became visible (it was still an amazing sight to see).

Today, I’m celebrating the forty-seventh birthday of my one and only son. I wish I was there to give him a hug, but you know… rain, clouds, grey skies, cold temperatures. I wish he was here where it’s sunny and warm! Yes, I realize the PNW is having an unseasonably warm and dry winter but still – the chance of rain is always there. Happy birthday, Mark! I love you!

I’ll be trying to keep more up to date with my blog posting from now on. I’m rested, my body is doing okay, it’s sunny out, life goes on. Thank you all for hanging in there with me. I appreciate you! Hope your day is restful!

PS. If I missed you and something we did together, please forgive me! I really will try harder from now on 🙂