On the road again!

I left the Pacific Northwest on Monday morning, the day before yesterday, finally hooking up my Li’l Homey and hauling it out of Mackenzie’s driveway, and heading off into the sunset. Well, ok, the morning sun.

Driving south brought increasing amounts of smoke from the wildfires in bone-dry drought-ridden California – the mountains around Ashland, Oregon, were completely invisible.  (Pic taken “illegally through my windshield” 🙂 )

If I’m driving Interstate 5, which I was this trip, I always try to stop at the Randolph Collier rest stop just south of the California/Oregon border.  It’s situated on the Klamath River and is more like a park than a rest area. There are several parking lots and the farther back you go from the road, the quieter it is – most people who are parked that far back are spending the night; the semis even turn their motors off.

On this stop, I sat outside at one of the tables, enjoying the breeze and the evening light.  The above pic is a panoramic photo of some of the sitting areas, the Klamath River on the right, and the grassy areas visible at the rear of the pic are throughout the rest area. 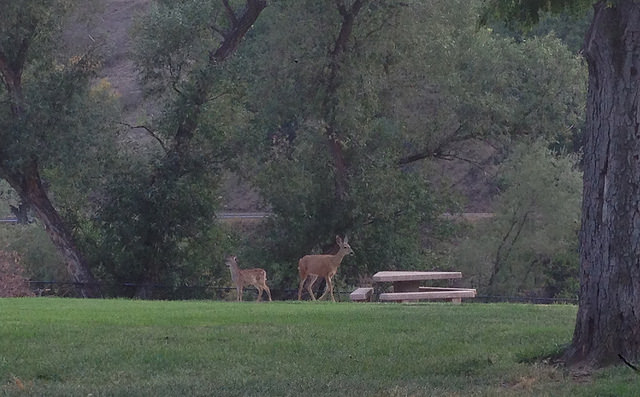 A very nice place to stop, if I do say so myself.  A mom deer and her young one came close to where I was sitting and grazed nearby; there are also feral cats here and one or two of them ran across my path as I was walking.  Dusk is a great time to see local animals.

Most people know that California is in the middle of a years-long drought (I think I read three years?) and I’ve driven this section of I-5 many times but I’ve never seen Lake Shasta as low as it is right now. In checking information on the internet, somewhere I read that Lake Shasta is at 29% of its normal water level (it’s actually been lower – in 1977, it was a few feet lower than it is right now).

I’m unable to locate where I read that information but if I find it, I’ll add it here. To say I was shocked at the low water level as I drove over the first bridge going south would be an understatement; I was through here 10 months ago, and while it was low, it wasn’t shockingly low.  This was shocking! Trying to drive through all the road construction going on, I was unable to grab my phone and take a photo (another illegal pic!) but I took this one at the next area showing how high the lake used to be and where it is now. The first bridge crossed over an area that used to be a lake and now looks like a small river at the bottom of the gulch. If you’ve seen pics of Lake Oroville or Folsom Lake, also in California, you’ll know what I’m talking about.

The smoke began to clear as I drove even farther south and by the time I got to Sacramento, and headed east on Interstate 80, it was fairly clear.  The sky was blue, the air was warm and dry.  After spending the night up near Truckee, CA, I drove down the Truckee’s main drag and mourned the closing of OB’s Board. Way back when I lived in Reno many moons ago, I used to drive to Truckee every week to do the banking (this was back in the days before interstate banking!) and usually stopped at OB’s for a bite and something to drink before heading back home to Reno. 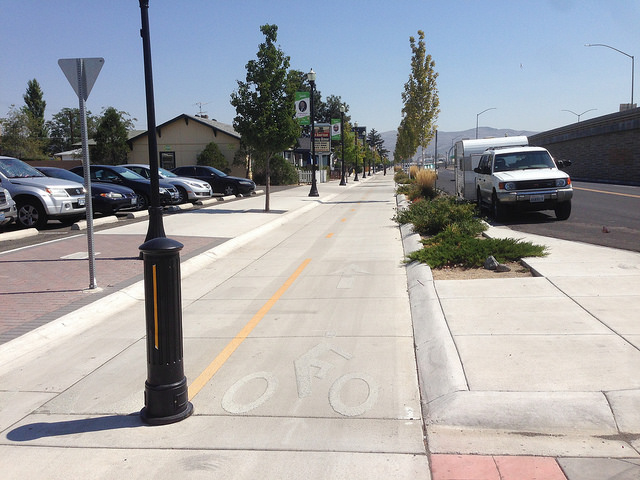 (In the winter, they made the most amazing Irish coffee anywhere, and it was always worth a stop to get one on a cold, snowy day, and hang out for a bit before getting back on the road.) Well, OB’s closed not too long ago. And I mourn them. I continued on into Reno and Sparks, stopping for an In n Out burger and extra extra well-done fries. The street I parked on had the most amazing set-up I’ve ever seen: there are sidewalks for walking, a round-curbed double-lane bike-way, a planted curbside area, street-side parking, and then the actual driving lanes. The bike lanes are what made it so amazing – curbed marked lanes just for bikes! Yay!  More cities could do this… I know they could!

Back on I-80, heading east, I passed Mustang, Nevada. Pulling off for a photo op at the location of a place I used to work as a weighmaster, Silver State Asphalt has apparently receded back into desert. I didn’t drive onto the property to see if any remnants of the plant remain but I did take a pic. Desert as far as the eye can see.  And that was that. Back onto I-80 I headed.

Fernley, Nevada, here I come for the night.  I’ll be Wally-docking tonight (across the street from the big Amazon fulfillment center) and stopping at the truck stop in the morning to fill up the gas tank.  Then I’m off to some place outside Dyer, NV, south of Tonopah, where there’s no signal for miles, but I understand it’s pretty peaceful and quiet.  Since Goldfield is also nearby, I think I’ll go see if I can find my great-grandfather’s grave. I love old cemeteries, and even if I can’t find the final resting spot of his bones, I’m sure I’ll have a good time anyway.  Wouldn’t you?

Until we next meet, happy trails!  See you out there on the road somewhere!

2 thoughts on “Washington to Nevada ~ Pine Trees to Open Desert”