Ah, yes, life moves on. And so do we, or else we get caught up in a never-ending spiral of sameness.

At least, that’s my take on things, and looking over the past couple of weeks or so, I’d say we can all attest to things changing – in our lives, in our country (whatever country we live in), in our world. Change can be “scary” for some people, even though change is really the only constant.

Didn’t someone else say that? Oh yes, they did: Heraclitus (535 BC – 475 BC), a Greek philosopher, is quoted as saying “change is the only constant in life.” This saying has also been translated to “the only constant is change.”

But what’s really scary about change? If we’ve lived with it all our lives, shouldn’t we be used to it by now?

I don’t know the answer to that, but I can tell you that I’ve always had change in my life and I’ve usually welcomed it with open arms. Sometimes I get a little butterfly in my stomach but I think that’s just to remind me that one in a while, change can be as dramatic as what a caterpillar experiences transforming into that butterfly. Talk about change! From a sluggy kind of crawling thing to a beautiful winged flying thing!

So I’ve been pretty secretive about the recent changes happening in my life. Not because I don’t want anyone to know about them but because it’s taken me so long to get these changes taking place and happening! I want change – and I want it now! I’m not a particularly patient person when it comes to change and having to be methodical about getting these changes to happen has been a relatively new experience for me.

Most of you know that two months ago, I badly sprained my ankle in a fall out at Lake Mead in Nevada and it’s taking its sweet time about healing. Of course, it’s taking about as much time as sprains do, and if I’d broken it, it would be healed by now, but it seems like it’s taking f-o-r-e-v-e-r! So, yes, it’s healing but it has slowed me down considerably. Everything takes longer because of the pain and lack of mobility; what I once could do in a day, now takes me a couple of weeks because I can only work an hour or two at a time before I have to quit. And these super high temperatures in Southern Nevada haven’t helped a thing. Not a thing. When it’s over 100 degrees by 10 o’clock in the morning, well, it can slow a body down. Yes, high temps are normal here, but not this early in the year! It’s very unusual. And if you’ve been following the weather reports, you know that the entire west coast seems to be extra hot right now. Even the Pacific Northwest is experiencing unseasonal high temperatures. Crazy weather!

Li’l Homey is going to a new home. Yup. I’m selling this little tiny trailer. It’s time for my little Home Sweet Home to become someone else’s plaything, and maybe get all glamped up and go out on a trip with a bunch of other vintage trailers. 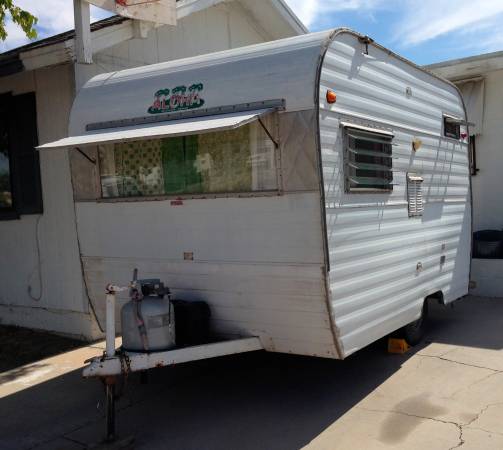 In any event, Li’l Homey is being sold and I’m moving on. That’s my big news. I’ve spent the last month cleaning it up, putting new carpeting in the closet, washing windows and mirrors, scrubbing walls, wiping out drawers, polishing the floor, washing and ironing the curtains. It’s all ready to be hooked up and taken away to the forest or beach, to have fun in the sun with someone else. It’s ready! Yes, it is!

CLICK HERE to go to the craigslist ad. Maybe you know someone looking for a cute little vintage trailer and can pass this link on. I’d certainly appreciate it!

This represents a huge change for me. When I became homeless eight years ago, I didn’t know what I was going to do. I eventually bought a 19′ trailer that I lived in with my big ol’ Golden Retriever, Dinah, and my three cats, Max, Thelma and Louise. I sold that trailer after a few years and bought Li’l Homey, a 13′ vintage trailer. The cats and Dinah Dog have all moved on to the Rainbow Bridge, and now it’s time for me to do some moving on of my own. Not to the Rainbow Bridge (although I wouldn’t mind seeing all my friends!) but on to other adventures. So now I’m back to being homeless – no house, no trailer – but I’m excited about what comes next. I’m going to cruise the world. Yes, I am!

I want to walk the Caminho Portugués from Lisbon, Portugal to Santiago, Spain, walking north along the Atlantic coast to Santiago. I want to see Lake Atitlan in Guatemala and visit some friends who live there. I want to eat bun in Vietnam. I want to see the Dalmation coast in Croatia. I want to ride the night train from Prague to Krakow, Poland. This is just a few of the things I want to do; there are so many more things and it’s time to go do some of them.

Little side note: I’ve already completed so many things on my long-standing to-do list that when I read about other people doing stuff from their “bucket lists,” it’s often things I’ve already done, and I came to realize that I need to move on and complete my own list. (I hate that term “bucket list” – my list is things I want to do now, not things I want to do before I die. If I called it a “bucket list,” it feels like it gives me permission to procrastinate and I might never get the things done; hence my term: to-do list.)

So there you have it, my Big News. Perfect timing, don’t you think, what with a gorgeous full moon happening a couple days ago, along with the “Star of Bethlehem” converging of Venus and Jupiter visible in the night sky. I’m ready to move on. Ready for new adventures. Ready for anything!

See you out there in the world somewhere!

The Times, They Are A-Changing…
Tagged on: Aloha trailer    Li'l Homey    to do list    trailer for sale    vintage trailer

24 thoughts on “The Times, They Are A-Changing…”