Nick and Coleen are doing it again.  They’re collaborating on a kids’ book.  Again.  Their last book won five awards.  Count them – five! 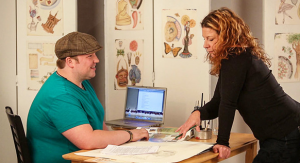 And this book is going to be even better than that one!

So who out there likes to eat?  Likes to have someone else cook for us?  Likes to learn new things?  And likes learning about other people and their cultures?

Well, if that’s you, pack your bags and get ready for the brilliance of Nick and Coleen, together again.

This time, their joint effort is a cookbook for kids that features international recipes and is called The Cultured Chef: An International Cookbook for Kids. Along with those recipes, the book includes information about the culture of the people who eat the food highlighted in the recipe.

Nick and Coleen have posted their new book project in Kickstarter, which is a place for community funding of projects of all kinds.  The Kickstarter campaign for The Cultured Chef goes for 30 days – in the first three days since kick-off, Nick and Coleen have reached 42% of their goal!  Good news for them and The Cultured Chef because not only does it look like they’ll make their goal of $8500 but if they surpass it, any extra funding will allow them to do more to make the book even better, such as finer quality paper, offset printing, fancy cover design, custom interior, and much more!

Here it is, straight from their Kickstarter page, some information about the book project:

A not-so-ordinary cookbook for kids filled with unique recipes, whimsical illustrations & stories about fascinating people & places!
More than just a cookbook, The Cultured Chef takes into consideration a child’s natural curiosity about our world. The book offers ways to stimulate all of a child’s senses through unique recipes, whimsical illustrations, and stories about fascinating people and places around the world.

Each of the illustrated recipes you'll find in The Cultured Chef offer easy step-by-step instructions that allow kids to take the driver’s seat in the kitchen, with a supervising adult as their assistant. Readers can choose from a wide assortment of recipes that include breakfast, lunch, dinner, as well as tasty desserts and snacks! Check out some of what we have to offer:

Now, that’s just a little bit of the information and some of the foods from the cookbook.  Here’s a sampling of the cultural questions that get answered in this book:

Have you ever wondered why people in other countries do things differently? The Cultured Chef shares many facts about the interesting people, places and customs around the world:

•    Why did Israel and Lebanon get in a fight over Hummus?
•    Why do some monks shave their heads?
•    What's the story behind the Statue of Liberty?
•    Why are cows sacred in India?

Each Kickstarter project provides “rewards” for the people who help fund the project.

The Cultured Chef has reward levels from $1 to $8,500 with each level containing items such as signed and numbered copies of the cookbook, recipe cards, and your very own fairy painting by Coleen.  My favorite level is the $1,000 level – Nick and Coleen will come to your home  and cook any recipe in the book for you!  (Okay, that level is only for people who live in Washington or Oregon, or for you to give as a gift if you know someone who lives in either of those states.)

I’m really excited about this project.  I personally know both Nick and Coleen and I can say from first-hand knowledge that their work is fabulous!  And as I mentioned at the beginning, their first book together won five national awards, including the Benjamin Franklin award for children's books.  That book is still being published today; it's called Baking with Friends: Recipes, Tips and Fun Facts for Teaching Kids How to Bake and you can see it and purchase it here.

I don’t have little kids any more and I don’t know any who aren’t already  receiving this book from their own parents, so I backed this project knowing that I was going to be getting some kids’ books without having any kids to give them to.  In trying to decide what to do with them,

I’ve decided I’m going to donate them to the local libraries where kids from all over will have the chance to check the book out and do some cooking and learning together with their parents or another adult.  So if you don’t have little kids to give one to, put on your thinking cap and figure out who would benefit from a great little book about cooking and cultures – local libraries, preschools, school libraries, church libraries, the YMCA/YWCA, or donate them to a local high-school fundraiser banquet (they all have them!).  You’d be doing a great thing for your community just by backing this project and donating the books you receive as your funding reward.

I hope you take a few minutes and check it out.  Watch this little 3-minute video about the project and check out the Kickstarter page; maybe you’ll find a level at which you’d like to participate in this fun kids’ book.  You won’t be disappointed!

The Cultured Chef: An International Cookbook for Kids website

6 thoughts on “The Cultured Chef: an International Cookbook for Kids”