I ditched Disneyland yesterday to go to a movie with some friends.

Now, I love D-land.  Love love love it.  I could live there.  I could bunk right next to Sleeping Beauty in her castle with the moat that used to have swans in it but now has a wishing well.  (I don’t really think the swans left because someone built a place to toss coins into and make a wish but it does make you wonder, doesn’t it?)  I could sleep on a park bench next to the Carnation Terrace and drink coffee and eat fried chicken, except that I really don’t like fried chicken and it wouldn’t fit in with my new eating program anyway.  I could hole up in the Nemo submarines and use one of the flotation devices for a pillow.  Ok, you get the idea.  I could live there!

But I decided to go to a m

ovie yesterday instead.  It was a movie I really wanted to see and since I spend so much time by myself already, I thought it would be nice to go to a movie with somebody for a change, and since they asked me, I took them up on their invitation.  So I changed my mind.

We headed out to see a movie that has gotten a huge Oscar nod with 12 nominations – The King’s Speech. In just a few short words, it’s a movie about King George VI and the speech he made right after England joined the war against Adolph Hitler and Germany.

What that doesn’t tell you, however, how much of a feel-good movie it really is. The movie is full of humor, offering smiles around every other corner, and has a great ending that has us cheering for the king that almost wasn’t.  It also gives us an inside look at life in the British royal family during the 19302 and ’40s, from the father who thought that teasing and taunting his son’s stutter would cure him of it, to the brother who, by British law, had to abdicate the throne in order to marry the woman he loved.  Regardless of whether or not the portrayal is accurate, both Colin Firth and Geoffrey Rush are excellent as the King and his speech therapist, respectively.  Their chemistry, as they say, on-screen just works.  Needless to say, I thought it was an excellent movie with great acting and beautiful sets.  I hope it wins a few awards. 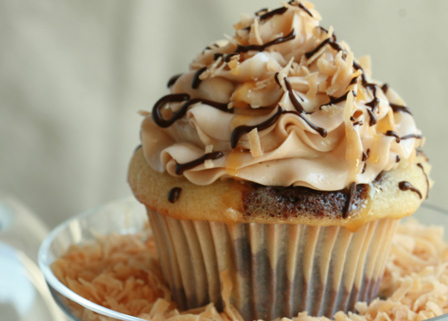 Adding to the fun yesterday was a trip to the new cupcake bakery that just opened a few months ago across the way from the movie theater here in beautiful, charming Vista, California.  It’s called Little Cakes and has a unique variety of small cakes that makes you wonder just what they taste like….enough that you want to buy one of everything just to find out!  I really wanted to try the Pancake and Bacon one but Mint Chocolate was calling my name much louder….

Sometimes, for me, I have to remember that it’s important to decide in favor of fun, friends, and food.  Sometimes, I just want to have an adventure on my own.  So going with what feels good at the time gets my vote!  Disneyland will always be there and I still have about 10 months to get about 175 or so visits to the Pirates of the Caribbean before my annual passport expires.  And oh by the way, if you’re in So. Cal. during the next 10 months or so, let’s go to Disneyland together – we’ll have a great time!