In my quest for new adventure, I decided I wanted a motor home.  The reasons were varied and included rationalizations such as:

So I started methodically researching the type, style, size, and different fuel types of motor homes in my price range, and dramatically narrowed down the possible pool of contenders.  Once I decided on what I was searching for, I began in earnest looking on craigslist and eBay for something that would be the perfect fit for me and my girls, that is, my 15-year-old Golden Retriever mix, Dinah and my 10-year-old tuxedo kitty,  Louise (the surviving half of the kitty duo known as Thelma and …).

I found lots of motor homes available due to the economy forcing people to sell their “toys” and with the price of gas continuing to rise, leading people to down-size their homes-away-from-home, replacing them with tents.  I began making a list (or two) and decided to head back to Washington to make my purchase in the Pacific Northwest, since that’s where my residency is, and registering it would be easier.  Again, another one of those logical reasons behind this whole process.

However, once I arrived in the cold, wet, grey north, every single one of those motor homes that fit the prescribed bill had disappeared from any kind of listing site, either sold or deleted, making it pretty clear to me that I was not going to be finding a motor home any time soon.  Keeping an open mind, and occupying my time with tasks other than hanging out on craigslist and eBay 24 hours a day, after ten days, a friend introduced me to an incredibly tiny and very old travel trailer that was owned by a friend of hers.  It wasn’t love at first sight.  It wasn’t even “like” at first sight!  It was everything I had decided I was going to replace in my “new” home and here it was sitting in someone’s farm outbuilding, collecting dust and the ever-present mossy sheen that everything here in the Pacific Northwest eventually gets if it’s outside for any length of time.

I politely said “no how, no way” and after chatting with the new little goat kid and resident kitty, we left and went home.  That evening, I began to re-think my “no way” decision and thought that maybe it was do-able and could even be fun and definitely would be a great adventure and conversation-starter on the road…. problem was, my friend had decided she would buy it since I didn’t want it!  Oh no!  Now I want it and so does she!

In the end, we decided I would buy it, apply some TLC and elbow grease, and whatever updating and fixing up it needed for our immediate purposes and maybe next year, she would take it when I’m finished with it.  We made a phone call, drove over the next day, negotiated a price, hooked her up (she’s now a gender, instead of an “it”), brought her back to the farm and installed her in the workshop, where I can work on her to my little heart’s content.

I’m excited beyond words, and so anticipating this new adventure that I get all giddy inside just thinking about it.

Please join me in welcoming the newest addition to my little traveling family: 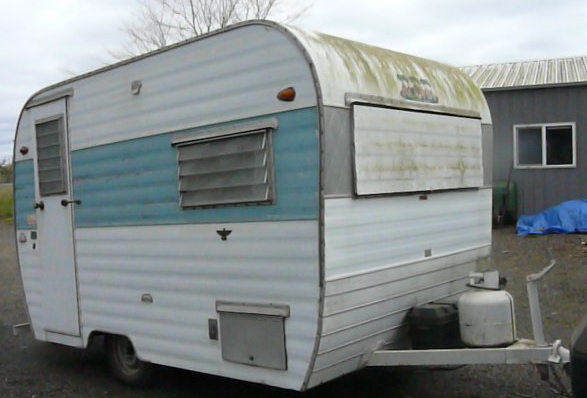 Keep coming back – watch as we get cleaned up and spiffed up, soon to be seen on the road, possibly somewhere near you!