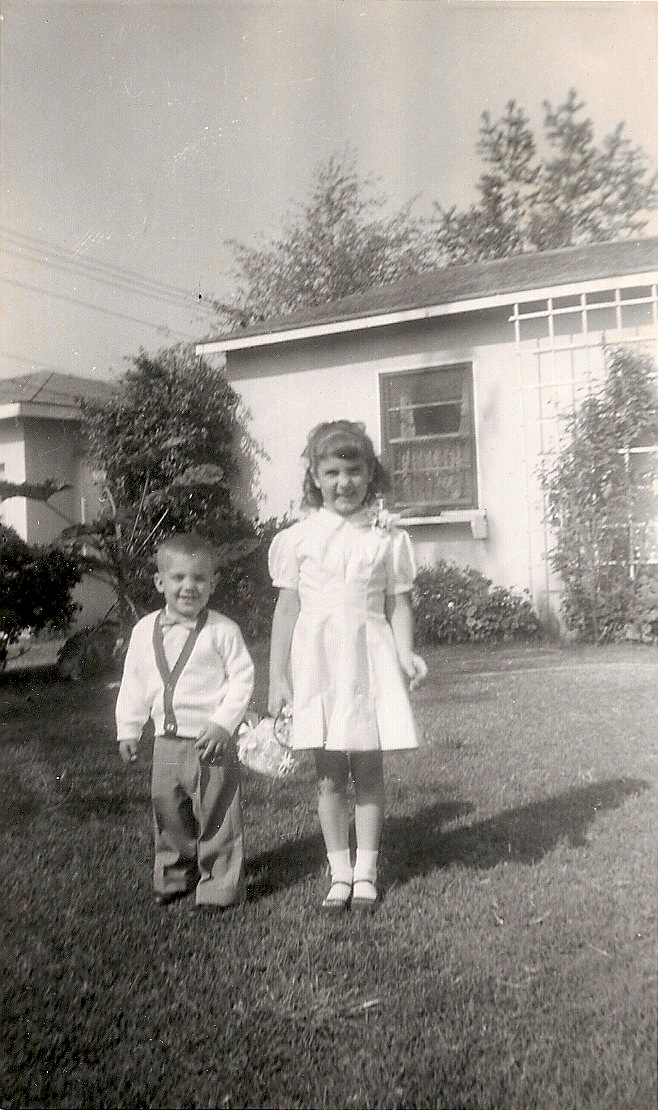 Fifty-five years ago today, my little brother, Arthur James, was born.  He was one of those people who seemed to be happy all the time, teasing everybody he could, and running to mommy when someone teased him back.  As his big sister, I was happy to do things like dig a hole in the back yard, have him lie down in it with his head resting on the edge and bury him up to his chin in dirt.  (Boy howdy, did I get in trouble for that one!)  He was always as skinny as a rail and I used to tell him that if he turned sideways and stuck his tongue out, he’d look like a zipper.

Here we are together in front of our house on Wesley Grove Avenue in Duarte, California.  The back yard was full of fruit trees that we happily built tree houses in and climbed to our hearts’ content.  It was a friendly neighborhood for many years, with the Helms Bakery man stopping to give us cookies while our moms bought bread.

I left home when Artie was 13 – my parents were more than happy to see the rebellious seventeen-year-old that I was move into my own place and leave the family in peace.  I saw him on occasion over the next few years but since I had a baby of my own to take care of, I didn’t really have a lot of time to pay much attention to him as he was growing towards adulthood.

He moved to Portland, Oregon some time in his twenties, working at odd jobs, living with friends, never really settling down in any one place, even living under the Burnside Bridge when he had no place else to go.  He ultimately took his own life the same way that John Belushi died – with an overdose of alcohol, cocaine and heroin; he was three weeks shy of his fortieth birthday.  Still today, on a sidewalk on Burnside in Portland, you can see where he signed his name in a concrete patch in the sidewalk, dating it just weeks before he died.

His final years seemed to be plagued with drug abuse and alcohol, never holding down a steady job, roaming the streets at night, like a lost soul not finding any place to call home.  People who knew him during that time say he was always friendly, with a smile for everyone, always pleasant, just like I remember him when I was the big sister and he was the little brother.

So here’s to you, little brother – Happy Birthday, Artie!

4 thoughts on “Today is My Little Brother’s Birthday”