Oh my, where do I start?  Breaking down is probably the number one thing that keeps so many people from even starting on a road trip.  We freak ourselves out with the “what-ifs” and the “I don’t know how to’s…” and we let it stop us from even beginning to do whatever it is.

Here it is: What if a tire blows out at 70 miles per hour?  What if it’s a front one?  What if my radiator leaks and the engine fries up from no coolant?  What if I can’t get a signal and can’t call Triple-A to tow my car?  What if, what if, what if…

Or what about the times something actually has happened to us and we never want that thing, whatever it was, to happen again because it scared us, freaked us out, or even, heaven forbid, injured us?  What about that?

We never get started if we listen to those voices talking to us.

A couple of evenings ago, I had one of those experiences we never want to have, that started to freak me out, that threatened to put me into an emotional tailspin, and that insisted that I make some phone calls and reach out to other people.  Heaven forbid!

Here’s the story: Sunday evening, I pulled into a rest stop and as I walked from the restroom back to my vehicle, I could see that the front of the trailer was pointed down towards the asphalt at almost a 45 degree angle.  The big nut that holds the hitch ball on the receiver was only a few inches off the pavement.  I poked my head around the hitch, looking to see what was going on, and discovered that the hitch receiver that my trailer was attached to was breaking off.  To say I was instantly freaked out is probably an understatement, as I realized the seriousness of the situation and the potential disaster that I had averted by pulling into the rest stop when I did.  Holy cow, did my mind go into overload or what?!  Yes, it did.

But it also went into “what do we do now” mode – almost as instantaneously as the freak-out happened.  Almost.

I pulled out a wood block and wound down the support column for the front of the trailer.  (I’m sure there’s a technical term for what I did and the names of the pieces of equipment I did it with but my brain is failing me at the moment.)  Then I took some pics and called my son.  In that order.  More to brainstorm what the heck to do now than anything else but I also was looking for a calm voice to talk back to me because my inner voice was threatening to start screaming at any moment.  I then posted my new adventure on Facebook and immediately, my friends starting commenting back with their support and positive energy adding to the mix.  I called a friend for some additional calming and then put myself to bed for the night.  It was Sunday night, after all = nothing else I could do until morning.

Come Monday (thank you, Jimmy Buffett!), I called the place I bought the hitch from and as we talked through the alternatives, he signed me up for roadside assistance to get my trailer towed to the store.  Problem with that was, a new hitch was going to be 7-10 days away after ordering, and that’s business days!  We’re talking almost 2 weeks until the new hitch would be installed and in the meantime, I’d be hanging out in Northern California, waiting for the colder says to start making their appearance.

As I’m contemplating all this, I decide to make another trip to the restroom, more to buy some thinking time than anything else, and as I’m walking back to my trailer, I see a man wandering around, checking out the tiny trailer.  We start talking about vintage trailers and I mention my broken hitch.  He gave me some advice on getting it repaired instead of replaced, and helped me unhook the trailer from my car.  I went over to talk to the rest stop maintenance worker who told me she was there until 4 PM and it was fine to leave the trailer parked there all by itself and she’d just keep an eye on it and make sure no one towed it out of there except me.  (Gary, the man who likes vintage trailers, and his wife, Jean, are newly retired and heading to Arizona.  They’re from Surrey, British Columbia and hoping to enjoy a month in the southwest sun.  Kindred spirits of mine, for sure!) I took off for town to find a welder. 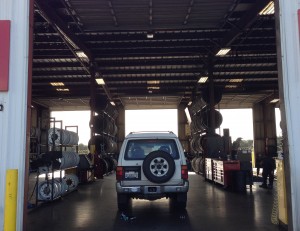 There are three truck stops in Corning, California.  No welders.  I drove up and down the streets looking for a likely place but nothing appeared.  However, my “little voice” inspired me to stop at a repair facility with a Freightliner logo on the front.  I found myself talking to a young man who said all of them are welders in the shop and he would be happy to help me out.  I pulled my Montero into a service bay, where it pretended to be a semi-truck, and the four guys with nothing else to do at the moment took on this puzzle of a project to try to figure out what would be the best way to repair this broken hitch.

Three hours, a cup of coffee, a pancake lunch, and a short wait in the customer lounge later and they came to tell me I was all ready to go, would I like to see it?  Absolutely, I said!

I walked out to my little car sitting in the big, huge bay and what I found was nothing short of amazing!  Not only did they repair the broken damage, they welded two new braces on either side of the existing brace and painted the entire thing in shiny, black paint!  It looked brand new!  Wow!  Spectacular! 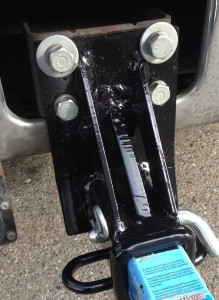 A big, huge thank you to Camping World and Petro Truck Stop for the amazing people they have on their payrolls.  These people deserve raises!  And more vacations!  And a catered lunch every once in awhile!  (Yes, I’ve written emails and talked to superiors, and I have more emails to write.  I do believe in acknowledging people who give great customer service as much, if not more, than complaining about those who don’t.)

Thank you to my son for all his support and encouragement – it must be interesting having a mom who doesn’t just sit home and bake cookies (although I do like to do that, too!) – at least, it’s never boring!  Thank you to my friend for the hand on the forehead.  Thank you to my FB buddies for the encouraging comments and energetic support from near and far.

And here’s my pontificating for the day: The Universe (or God or Allah or Higher Power or whatever you call it) supports us all, no matter what situations we find ourselves in, if we will only allow that support to envelope us.  We can allow the fear to stop us or we can step out and through whatever it is and move forward.  We are taken care of! We are!

11 thoughts on “There’s Something About a Breakdown…”