No matter where you go, there’s bound to be critters around, especially if you’re out in the boonies somewhere, or in a campground, or even in your own backyard. Sometimes those critters are ones known to us and other times, they’re strange and sometimes hazardous to your health, if handled incorrectly or accidentally cornered.  Sometimes they crawl, sometimes they fly, sometimes they just sit there looking at you, but to me, they’re always interesting. Yes, I’d rather see a rattlesnake from afar, but if you know what to do with them, they’re less scary than they might have been at first.

I haven’t seen any scorpions or centipedes, although I understand they live out here in the desert, too, and I’m just as happy if I don’t. To tell you the truth, I don’t know what to do with a scorpion or centipede so I hope they just stay home, wherever that is, and don’t venture into my shoes or car. Snakes, on the other hand, are something I’ve seen off and on over the years, and have even owned one or two, along with a tarantula, but rattlesnakes still make my heart beat a little faster. Ok, a lot faster. Even though I know most of them are more interested in passing right on by, I still have an adrenaline rush going as soon as I see one.

My apologies for the lack of resolution for some of the pics – all were taken with my iPhone 5 and are unaltered except for cropping where necessary to show the critters up close, and therefore, sacrificing clarity in the process.

On with the critters!

This little guy, a baby Sidewinder Rattlesnake, was in a campfire ring that a friend, Charlene, had her hand in, arranging the kindling and wood for that night’s campfire. I threw the quarter down next to him to show just how small he was – too tiny for a real rattle and still trying to sink into the sand to disappear away from us. He never moved a muscle. Or batted a rattlesnake eyelash. Charlene did a fine job of scooping him into my bucket and the next morning, relocated him quite a ways away from our camp. I kept thinking about his up-to-seventeen-more siblings and his mom – were we going to find them nearby? 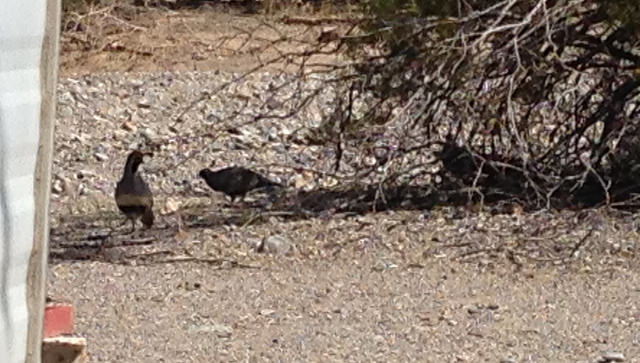 California Quail were everywhere when I lived in So. Cal. so having a similar bird near my trailer was a pleasure. These little ones are Gambel Quail, more common in Arizona than the California Quail. They seemed to hang out in the bushes nearby but they roamed far and wide every day, looking for something to eat. Sometimes there were four of them but mostly, I only saw these two. their little chirps were a nice touch to the otherwise quiet desert. 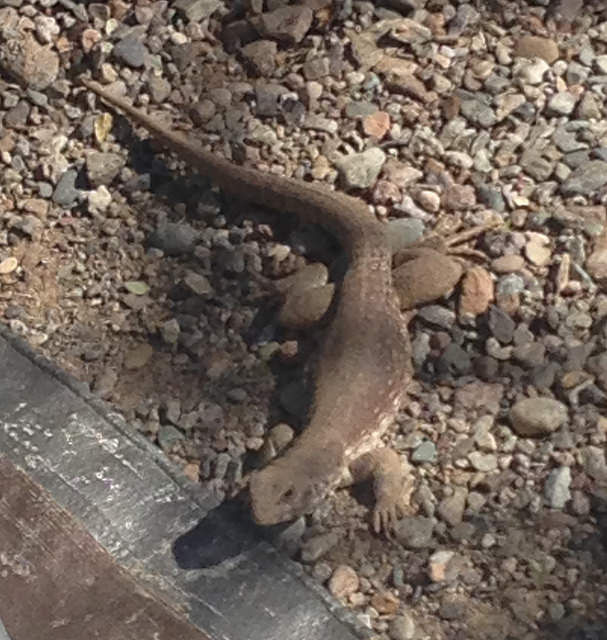 No idea what kind of lizard this guy is but he was almost as motionless as a statue when Charlene found him near her trailer. He let us take photos, as if he was posing for them or something, and eventually ran away, off to lizard-land, or wherever he was going.  Lizards are frequent desert guests in our camps, all day long – they’re one of the few things moving about in the afternoon heat.  If you CLICK HERE, this page will show you the many types of lizards that live in Arizona. I’ll be danged if I can figure out which one this big fella is. If you can identify him, let me know – I’d like to give him credit for whoever he is.

And here are those cone-shaped holes again that I showed you in the last blog post. Still no ideas as to what they are, but I do know they appear seemingly out of nowhere. One day, the ground is flat; the next day, it’s covered in these funny cone-shaped holes. All I know is some critter of some kind is making them. Whether it’s a bird, an insect, or a hairy-gilled desert magilicuddy, I don’t know. Let me know if you can figure this one out. 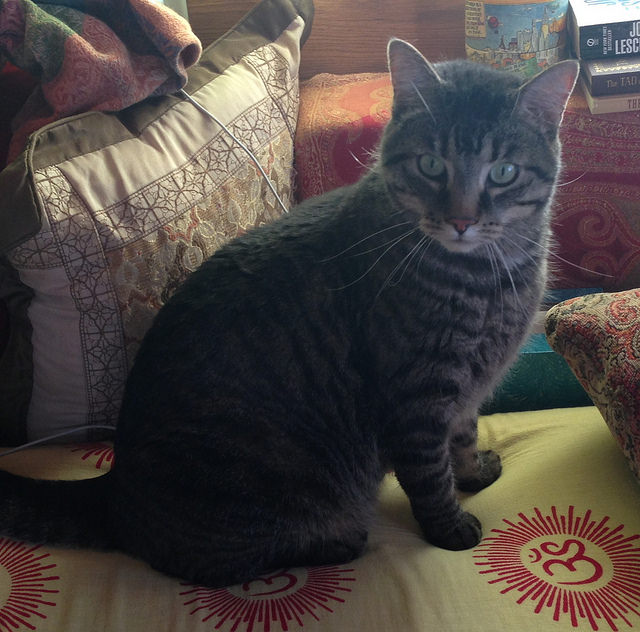 Sometimes, the critters that visit my camp are more recognizable, as in this furry, green-eyed, grey-striped Maine Coon beauty named Layla. She came right in the door as if she belonged there, climbed right up on the bed, and sat down next to the pillow, looking like the perfect accessory. Right? Don’t you think so? Layla actually belongs to my friend, Silvianne and they travel together all over everywhere. Having had cats all my life, including a few who traveled on the road with me, I’m guessing, though, that Layla really owns Silvianne, not the other way around. She loved climbing the trees near us. Layla, that is. Such an adventurer. Both of them.  Layla can come visit me any time. Oh yeah, bring Silvianne with you, Layla! 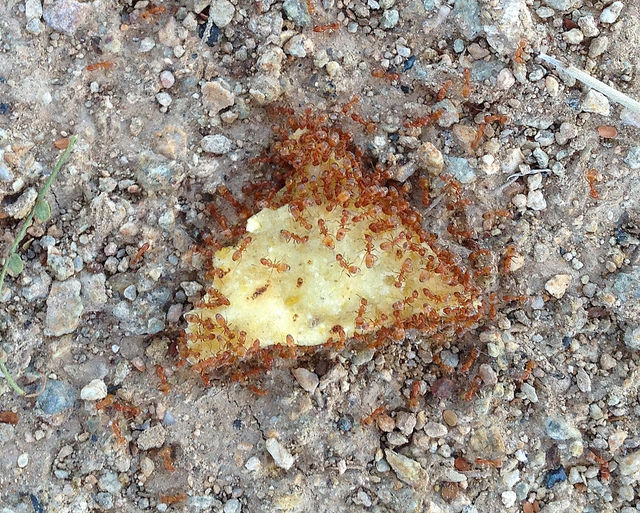 One afternoon, while sitting around chatting with friends, I dropped a teeny, tiny piece of tortilla chip on the ground; it was about a half-inch across at it widest. In what seemed like five minutes (maybe ten?), the little piece of chip was covered with these tiny red ants, each of them snagging a microscopic piece of chip for dinner and another microscopic piece to haul back to the ant house for a late midnight snack. Such busy little things, those ants. (I also discovered these little guys bite! A much bigger bite than they seemed capable of given their small size! Watch out for tiny red ants! They have fire in their mouths!) 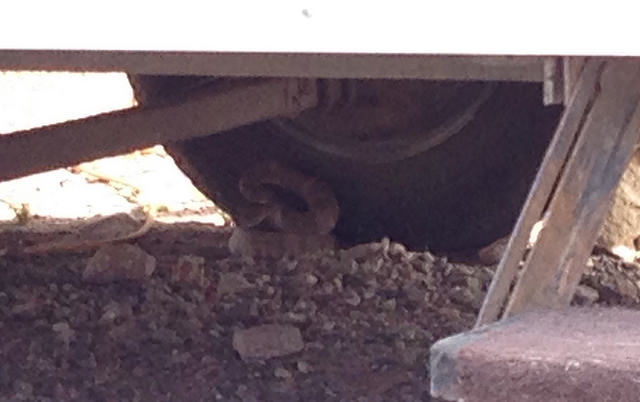 I moved camp about 75 miles north of Quartzsite to a beautiful canyon-y area just a few miles inland east from the Colorado River, near Lake Havasu. Camping there with a friend, Oakley and his dog, Happy, has been a nice, peaceful, quiet, respite from the desert camps where traffic is a constant background noise. However, one afternoon, Happy began barking at something. Happy isn’t normally a bark-er so you know when she starts barking up a fuss, something’s going on. I immediately heard Oakley hollering at her,and knew I couldn’t miss whatever was going on. I made my way over to their trailer to find Oakley trying to get Happy inside the truck and the words 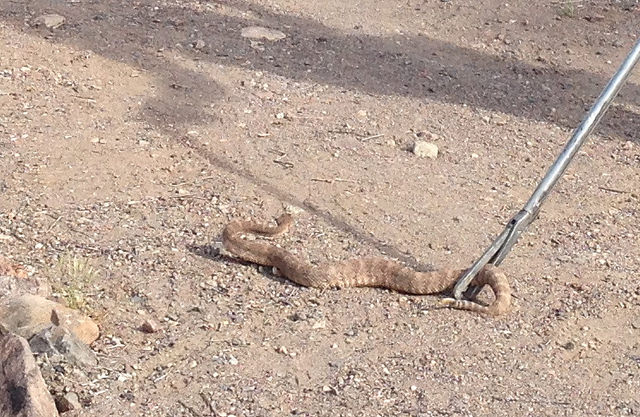 “snake” coming out of his mouth. Turns out, it was a Sidewinder Rattlesnake that had recently had a meal and was probably on its way home to digest it when it crossed paths with Happy, who, in typical Golden Retriever style, announced its presence with all her woofing. The snake, interrupted in its journey home, curled up under Oakley’s trailer near a tire and was not going to move, no matter how much dirt and rocks were thrown at it. Then, as if they’d been summoned, a truck with two armed game wardens drove by and the rescue process was turned over to them. The snake decided it wasn’t going anywhere if it could help it and promptly curled itself up inside the wheel, where one of the rangers snagged it’s tail with his trash-picker and tugged it out. Tugged it out with all his strength. That snake was not gonna move! But it did, and the rangers drove off with it in the back of their pickup to relocate it to another place a long ways away. Like a mile or ten. Or maybe fifteen. But who’s counting. As long as he’s somewhere else, we were happy. And so was Happy. And yes, our hearts are finally beating back at normal. 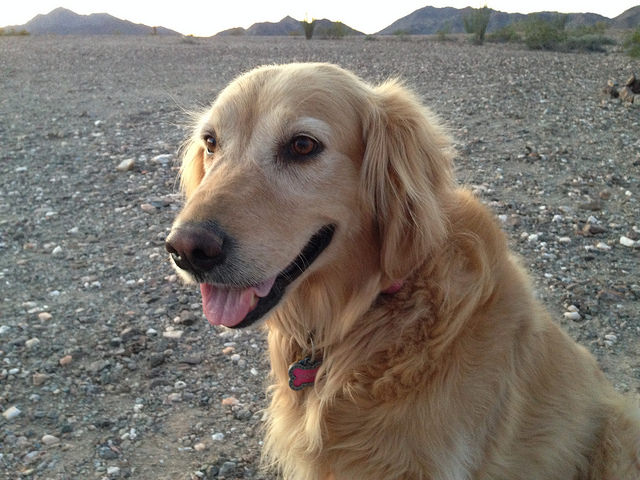 And here’s the Girl of the Hour. Isn’t she gorgeous? She’s such a sweetheart.

Thank you for alerting us to the snake, Happy Girl. Although I’m also certain that had you just let it go on by, it would be off in a hole somewhere digesting its big lunch and sleeping off the calories, it’s nice to know you’re on snake patrol.

So there you have the recent critter visitors to my home. It’s always an adventure!

See you out there on the road!

8 thoughts on “There Be Critters in the Desert!”