This past weekend, I cruised on down to the Vista Farmers Market – the market is going full blast, with lots of fresh fruit, vegetables, flowers, hummus, tamales, gyros, key lime cake and artisan wares.  I discovered a vendor still selling my favorite little citrus fruit, the calamondin or calamonsi. The calamondin or calamonsi are those little tiny citrus fruits used in a lot of Asian food, like my favorite Filipino dish called pancit, which is a noodle dish that I could eat all day long.  These little citrus fruits are sliced in half and served on the side to squeeze onto the noodles, giving it an extra little boost of flavor. 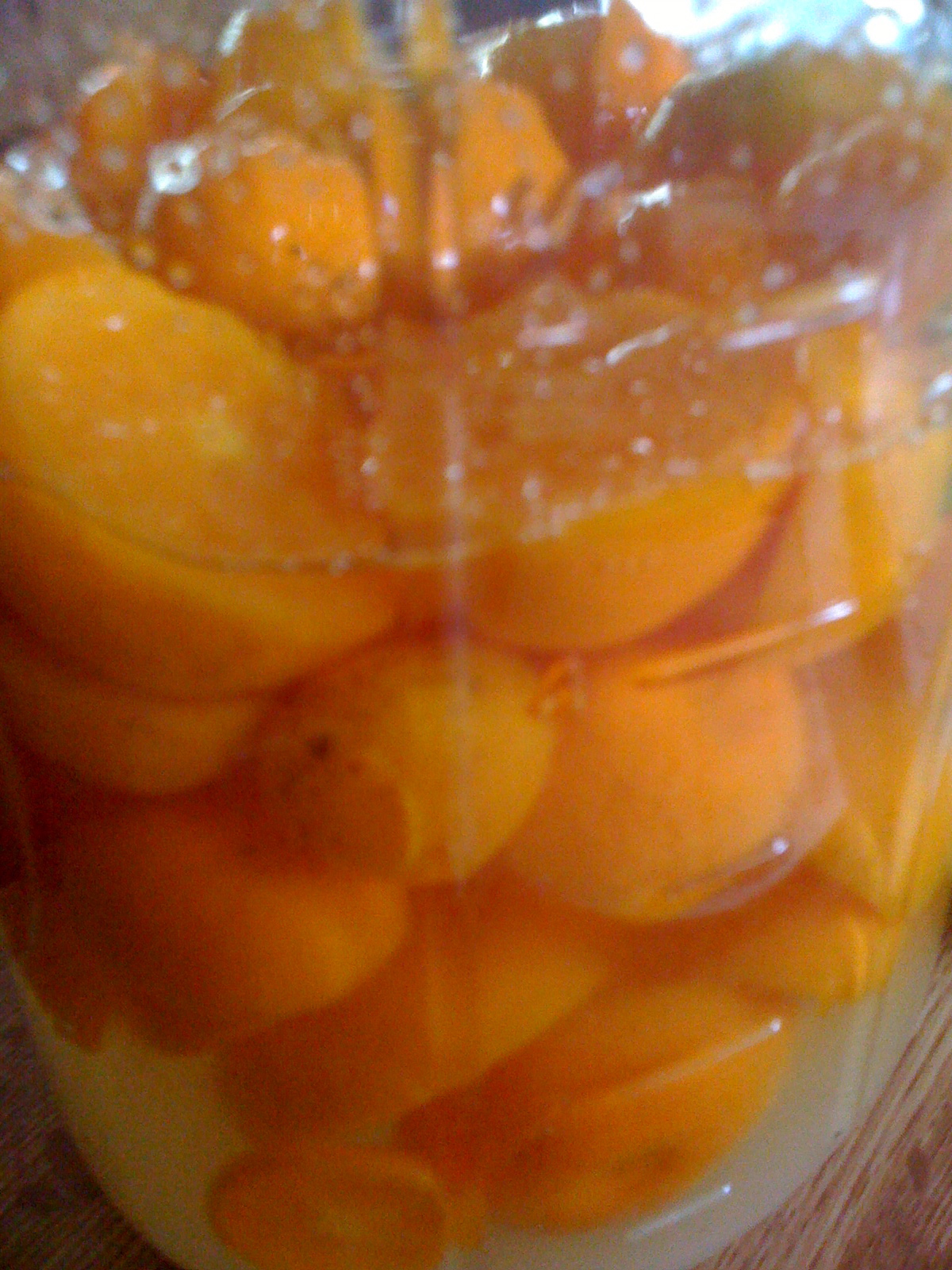 Backing up the story just a bit – at the beginning of the summer, I bought a basket of calamondins thinking I  was only going to need one or two, and ended up with 30 or 40 extras, trying to figure out what to do with them.  So I sat down at my trusty laptop, opened my favorite go-to page, and googled “things to do with calamansi” – and that’s when I discovered Calamansi Liqueur.  It turns out that Calamansi Liqueur is just like a little bit of heaven in a glass.  So since July, I’ve made the trek a couple of times out to Lita’s, an Asian market out in Oceanside, to buy more calamansi to make more liqueur.  So imagine my surprise at finding calamondin at the Farmers Market on Saturday!  I snagged me 2 more baskets and set about making another big batch of the sweet, flavorful nectar.

Now fast forward to this morning, after the calamonsi are stewing in the liqueur-making jar, I discovered once again that I have way too many of the little baby-sized citrus.  So I decided to try something completely different, although not 100% an original idea of mine – I took some raw sunflower seeds, a handful of fresh cinnamon basil from the pot outside the door and a couple of calamondins and put them into the blender jar on “grind,”pulsing it until it was all ground up into a spreadable mixture. I then spooned it into a bowl and added some olive oil and freshly ground Himalayan pink salt.  So now’s the best part – scooping it onto a piece of pita, I popped that first bite into my mouth and thought I’d died and been transported straight to heaven!  Wow!  What a delightful mixture of tastes!  Nice and raw and healthy, too….

So next week’s adventure to the Farmers Market is going to include a little sip of Calamansi Liqueur for my new-found friend, Nancy, she of the calamansi booth.  Except that I can’t remember if her name is Nancy or Barbara or Trudy…