I’m lovin’ being in the sunshine and warm air of the Southwest deserts.  It’s not only physically very therapeutic (the pneumonia that set into my lungs over Christmas is on the run) but being out in the wide open spaces where the blue skies seem to go forever and ever, the nearest neighbor is a ways away, and my feet enjoy the open air of my Chaco’s is also a soothing salve for my soul.

For the past week, I’ve been among a loosely-gathered group of people who are doing the same thing I’m doing, whatever that is.  Most have let go of their houses and a huge chunk of their possessions, and are now living a life of, well, if you ask them what the first word is that comes to mind about their current “lifestyle,” it’s seems like it’s always freedom.  Freedom.  The freedom to go where they want, when they want, with whomever they want.  It also appears the majority of this group arrived alone – most are single but some came alone, leaving a non-traveling significant-other back at home.  Perhaps that’s a freedom, as well.  (And just for a little clarification: some of these people are doing this on less than $500 a month!  Yes, that’s five hundred dollars a month… I really didn’t miss a zero!)

The sunsets have been spectacular.  The moon has been approaching full all week, finally achieving fullness early Thursday morning.  The desert has been lit up with the light of the moon – no flashlight even necessary to take an evening walk!

Although this is my first year at this gathering, this is the fourth year for the Rubber Tramp Rendezvous (RTR), so named by the coordinator, Bob Wells, who writes the blog and website at CheapRVLiving.com.  (Read his write-up on the first week of the RTR here.)  What a great thing this group has been – especially for those people who are just starting out on this living-on-the-road adventure. 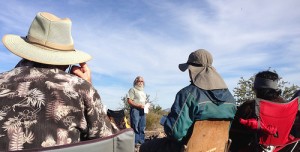 There are a number of people who are in their 20s or 30s along with a bunch of people who are probably in their 60s and 70s.  There are rigs of all kinds here: vans, trailers, RVs, tents, trucks-with-campers, cars, and even a bicycle. It’s quite the cross-section of people and of what they sleep and/or travel in.  The really cool thing is… these are people who are doing it – and not just talking about it!

For the two weeks of the RTR, Bob has coordinated a number of little seminars or sessions and get-togethers that cover such topics such as boondocking; going to Mexico for glasses, prescriptions, and dental work; everything you ever wanted to know about tires and how to plug a hole in one; an hour’s introduction to American Sign Language; as well as a chili feed where everyone brings a can of chili or beans or tomatoes or whatever else goes into chili, and it all goes into one big pot.  Since I’m vegan/gluten-free, I added a can of kidney beans to the mix but brought my own bowl of chili to eat; however, I’m told that the mixture was very good!  Who’d have thought that pouring all those things together into one pot would taste good?!  Tomorrow night’s dinner is a similar thing, only using cans of soup.  Again, I’ll be bringing my own to eat, but I’ll also bring something to add to the pot (I got a can of chunky-style vegetable soup – can’t have enough veggies in the soup!).

So I feel like I’m rambling… and perhaps I am.  The sun, the warm air, the dogs, the people, the saguaros, are all contributing to my sense of well-being and that helps my brain feel like it’s just cruising along at low speed (or what we used to call granny gear in my Jeep CJ5).  It’s a good thing to be in granny gear once in awhile and allow healing, physically and spiritually, to take place.

I’ve missed Dinah Dog terribly while out here (it’s my first real road trip without her) – I’ve made some new doggie friends, though, and I’ll tell you all about them another time.

On that note, I’m outta here.  Gonna go sit in the sun and read a book.