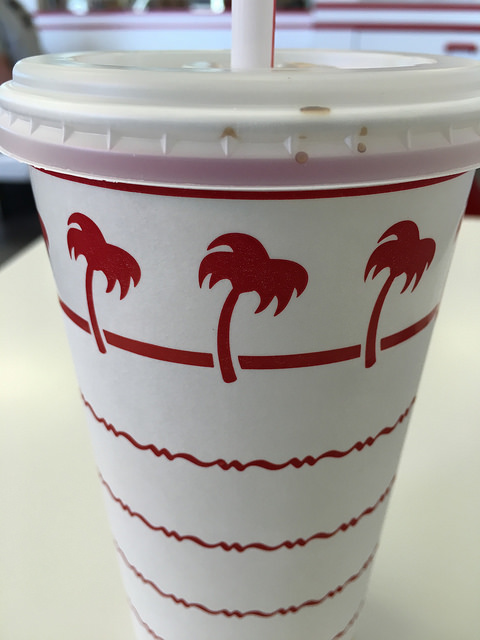 Heading south after spending the night in Wolf Creek, Oregon, I stopped in Medford for an In-N-Out cheeseburger. If you grew up in Southern California back in the 50s and 60s like I did, you probably already know that In-N-Out is a family-owned hamburger chain that’s been around since 1948 when they opened their first burger stand in Baldwin Park, California, just a bit east of Los Angeles. And it might also be safe to say that most of us who grew up with an In-N-Out just down the street still love-love-love our double-doubles and will go miles out of our way to get one, especially if we no longer live near one where we can get our In-N-Out-itch scratched any time we want. Now that they’re located in six states – California, Nevada, Arizona, Utah, Texas and Oregon – it’s become a little easier than it used to be to get that cheeseburger-and-shake fix…  or that double-double animal-style with extra extra well-done fries! 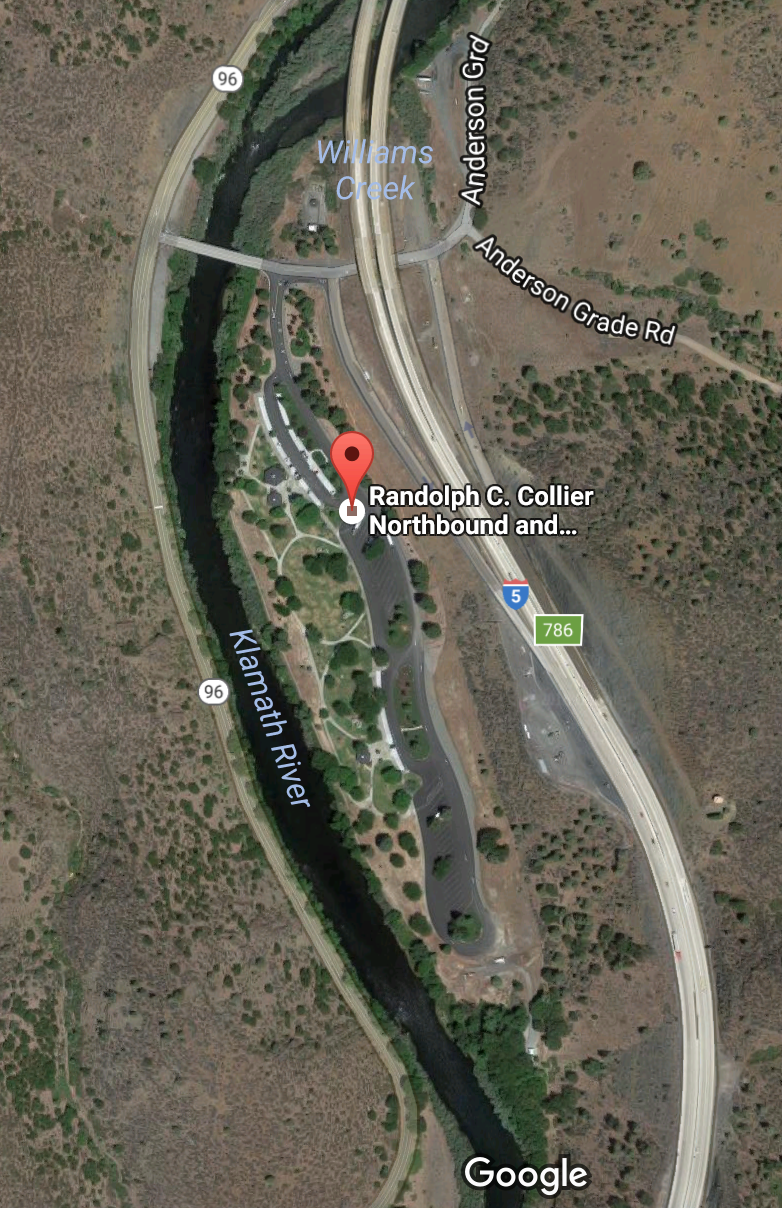 Oops. I got side-tracked by that double-double… okay, back to the road trip!

In all my travels, I can say without reservation that my favorite roadside rest area is in northern California, just south of the Oregon border – it’s called the Randolph Collier Rest Area and it’s located between Interstate 5, which rises high above the rest stop, and the Klamath River. Regardless of the time of year, this rest area is always a peaceful place to stop; I’ve even been known to spend the night there in my tiny trailer and I’ve seen deer wander through in the late afternoon/early evenings. The rest area is large enough that there’s no need to park near someone or have a semi-truck running its refrigeration generator right next to where you’re parked. It’s a great location, with multiple large parking areas, well-kept grounds, wildlife-viewing, clean restrooms, and a beautiful river flowing next to the picnic tables – and it’s easily accessed from both northbound and southbound I-5.

Sitting at a picnic table by the river, resting (what else would I be doing? heehee), I pulled out my phone to look at the Maps app (yes, there’s a strong cell signal at the rest area, too!) for a place to stop for the night, and I decided that somewhere near Mt. Shasta would be a perfect spot. I used a couple of other apps, AllStays Camp & RV and Public Lands, to look for potential locations for dispersed camping* – the Shasta-Trinity National Forest covers a large area and I knew I could find someplace that could be “home” for a few days.

I stopped at the Ranger Station in Mt. Shasta. 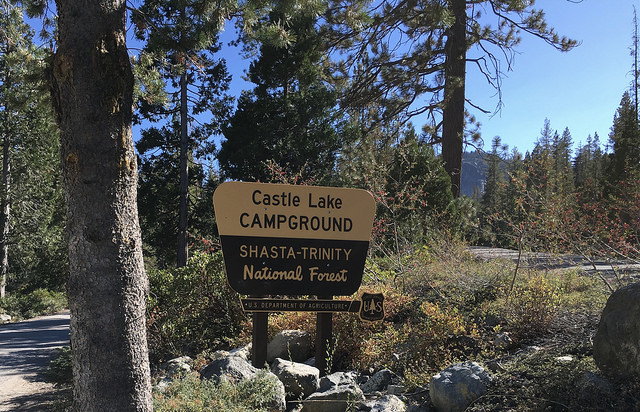 Rangers always know the best places to camp and asking them to suggest locations for camping also lets them know I’m up there (I usually ask the ranger for places where an older woman traveling/camping alone would feel safe). There were several potentially good camping areas and I chose the Castle Lake area for a couple of reasons: there are many places to disperse camp and there’s also a small campground. Soon I was winding my way out of town and up the road. My first stop was at the campground itself; it only has five sites and since they’re free and limited to three nights, they fill up quickly. Being Thursday, there were four of the five sites open and I chose a big, wide-open site and set up my “home” for the next three nights.

Since I was there for three nights, I had the opportunity to check out the little town of Mt. Shasta, do some geocaching, catch some Pokémons. Little museums are one of my favorite places to visit and the Mt. Shasta Museum is definitely worth the stop. Along with the history of the town of Mt. Shasta, the current special exhibit includes extensive information on both grizzly bears and black bears with demonstrations on telling the difference between the two, as well as hands-on displays, posters, and even a large grizzly bear “cut-out” that you can get your picture taken with if you want. Sightings of black bears are not uncommon in the Shasta-Trinity National Forest, as evidenced by the warning sign taped to all the tables at the campground (see photo above) and posted at the trailheads. A piece of interesting information that I learned at the museum: the California state flag has a grizzly bear on it, even though there have been no sightings of grizzlies in the state since 1924. The museum’s bear exhibit ends October 30, 2016. 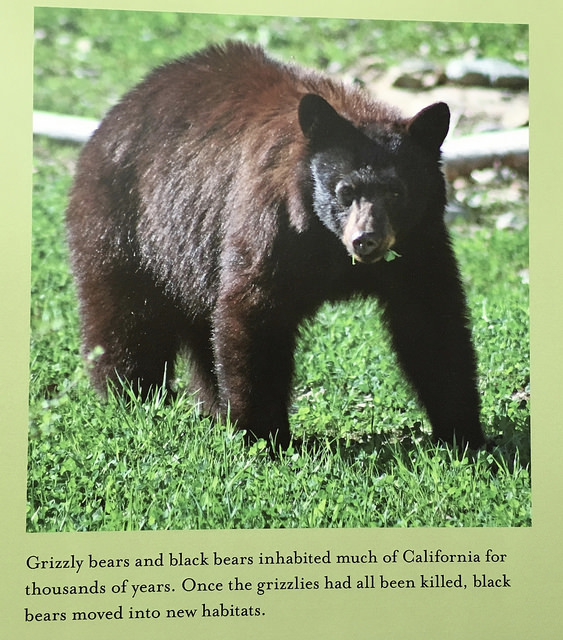 After roaming around the museum for a couple of hours, I wanted to stop for lunch before heading back up to the campground. I was craving something other than a sandwich or hamburger and while driving through town, I passed right by a local Mexican 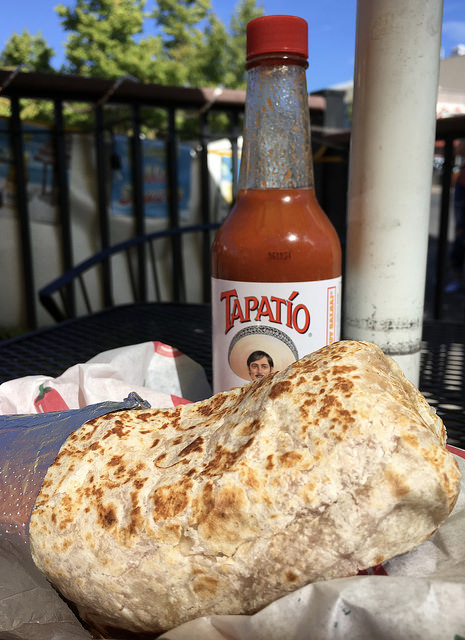 restaurant with almost every outside table taken. That was a good enough recommendation for me 😀 I ordered a bean and rice burrito, which was served with chips and house-made salsa – the burrito was huge… only half of it is shown in the photo on the right! I highly recommend them if you’re ever driving through or staying in the area. (Read the Yelp reviews here.)

Castle Lake is an alpine lake situated about 5,500 feet above sea level and has a nice swimming area along with a small boat ramp where you can launch your, uh, small boat. The day I was there, a number of people were kayaking, swimming, sun-bathing, picnicking, fishing, and otherwise taking advantage of the gorgeous sunny day. After resting a few minutes from my uphill jaunt, I headed down the trail around the lake, only making it about halfway around, where I watched a couple of kids paddle their standup boards, then sat on a log and got sap on the butt of my only pair of jeans, checked out the swimming area, watched a guy out in the center of the lake apparently swimming the entire length of the lake, and took some pics. Next time, I’ll bring my lawn chair and a picnic lunch and stay awhile longer.

I spent the third day just hanging out in the campground, relaxing, reading, drinking tea. Early in the morning, I had my first visitors of the day: several deer wandered through my site, nibbling leaves or leftover berries or whatever else they eat, before quietly moving on. Chipmunks and squirrels visited often and were quite active, chattering and chasing each other around, grabbing up seeds or nuts and running up the trees, no doubt still stocking up for winter. The birds kept me company all day long with their chirping and singing. It was just what I needed: a very pleasant, restorative day.

It’s a nice quiet campground, and one I’d definitely go back to if I’m ever in the area needing a place to camp. Or if the campground is full, there’s also plenty of dispersed camping in the area to be had. It’s a win-win all the way around! Maybe next time, you’ll come with me, and we’ll have a campfire and roast marshmallows 😀

6 thoughts on “Camping at Castle Lake in Northern California”