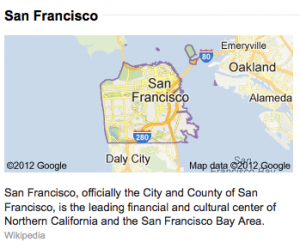 And then I found myself in San Francisco.

Sure, I was just a teenager “along for the ride” with my Earth parents and siblings, but as we drove north on Highway 101, the 1962 red and white Volkswagen micro bus we were driving in making that curvy left-hand turn onto the Fell Street off-ramp, I knew without a doubt that I belonged here in this city at the end of the peninsula somewhere near the center of the coast-line of California.  For the first time in my life here on Planet Earth, I was hopeful that maybe everything was going to be okay, that maybe I had found the place where I was meant to be, that I had just been dropped in the wrong location and now that minor mistake could be remedied.  It was as if my very cells were a part of the fabric of the city itself and I knew, I just knew, that I had found the rest of me, the best of me, the part of me that belonged somewhere “right.”

So how is this related to travel, you ask?  Well, maybe this’ll help answer that question.  With all the inter-galactic traveling and the Planet Earth Highway 101-ing, what I do know is that San Francisco has called to me ever since that first cruise through the City and I’ve continued to go there every chance I get.  A couple of years after that first trip down Fell Street, and after many more weekend get-aways just to re-charge the cells of my physical body, my then-husband and I left our little tiny apartment in the Los Angeles area and moved with our little baby to an even tinier place on Hayes Street, smack in the middle of what the city fathers called “an economically depressed area” – even so, I knew I was finally living where I belonged. The city was palpably alive for me, even though work was very tight and jobs were hard to come by, available “decent” apartments were few and far between, unemployment payments were only available to people who’d been laid off from their jobs, welfare for young, white, married couples was non-existent, and hippies still hung out in the Haight.  We stuck it out just over a year before we finally gave up trying to make it work – we moved back to Southern California where jobs and apartments were widely available.  And, oh yeah, we got divorced.

Over the years since those wild and crazy days of the late 60s and early 70s, I’ve been to San Francisco many, many times, too many to count. When I drive north, up Highway 101, I take that same Fell Street off-ramp and my body relaxes into the atmosphere surrounding that city by the sea.  There’s a knowing in my inner being that once again I’m home.  Once again, I’m where I belong.  Once again, I’m amongst people of my own kind.  And once again, I could stay there forever.

Do I travel out of my way to go there?  You bet!  I drive miles and miles out of my path and take hours out of my travel day just to drive through her streets and alleys, to look once again at my favorite places, to find some place I’ve never been, to park at the beach wall and breathe in the slightly stinky not-quite-salt air.  I can’t even begin to guess the number of times I’ve been in the City over the years but I know without a doubt that I’ll be there again some day, and in my heart of hearts, I know that I’ll even live there again some day.

Am I an alien who’s traveled to Planet Earth from another galaxy who’s now living on the “wrong” planet?  Maybe, but I also know that there’s some place “right” that calls to me, that reaches out to let me know its still there for me, that I no longer feel like I’m alone here on this planet and I no longer care that the home-town gang is out there in space somewhere laughing at the practical joke they think they played on me.  Ha ha.  The joke’s on them.

This post is the result of being tagged by another blogger, Dace of The Long Way Home, who has encouraged me more than I can ever express to her.  So the tagging comes with some “rules”: I get tagged, I have to tag someone else.  I don’t like putting others on the spot, just as Dace didn’t, but just as she encouraged me to follow through, I encourage the people I’m tagging to follow through as well.

So here’s the three people I’m tagging – please post only if you want to… no pressure from me:

Nancy is getting ready for her retirement in a couple of years by exploring all the ways she and her already-retired husband can travel together – both here at home and abroad.  She’s found some great ideas already!

Barbara has had some great life adventures, including her non-physical journeys into the “subconscious” and reading her blog is always enlightening!

June is a recent “new friend” and travels in her trailer to some very cool places – I love reading about her adventures, both at home and on the road!

Again, no pressure – please post only if the fancy strikes you!

Travel Confessions: Could I Be an Alien on an Extended Vacation?
Tagged on: aliens    California    San Francicso    travel