Another trip to Los Albondigas, I mean, Los Algodones… damn.  I just can’t get that straight!  I guess I just really like albondigas soup.  It was a regular Friday event in my life for many years – the little local mamá y papá taqueria near where I worked had a menudo lunch special that a bunch of my co-workers loved loved loved but I never really liked menudo so I’d always order their albondigas.  Mmmm….

Ok.  Back to the current story… 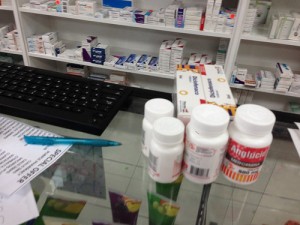 After picking up another 100 days worth of medications, along with a couple of jars of penicillin cream, I headed off to find tacos for lunch.  I was hungry!  What I found was a place where you could get your tacos made with fifteen (I counted them!) different kinds of meat!  Whoa baby!  Now, that’s my kind of place.  The carne asada and marinated chicken cooking on the grill on the sidewalk certainly smelled delicioso so I stepped into the sitting area of the little place and sat down. 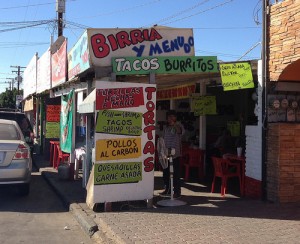 When the guy came by and asked what I wanted to eat, I said uno taco de pescado y uno taco de camaron, por favor (one shrimp taco and one fish taco, please), with a coka to drink, and I sat back to wait for my food, contemplating my very limited Spanish and hoping I hadn’t said anything out of line… keeping in mind that he spoke very good English.  Ha!

On the sidewalk, near the grilling meat, was a guy playing guitar and singing, presumably for tips, although I couldn’t see his jar anywhere.  It was a nice added touch to the Mexican atmosphere and seeing as how I was in Mexico, I thought it was awesome! 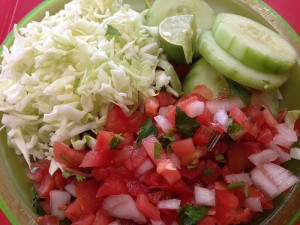 A plate of chopped cabbage (this told me the tacos would be San Felipe-style), a fresh tomato/onion/cilantro salsa, a couple of lime wedges, and a stack of sliced cumbers arrived at my table, along with a bottle of the real Coke.  Then came a couple of salsas and a bowl of tasty chips made from corn – I munched on these until the tacos arrived and then I piled the stuff from the plate onto the two tacos and began to scarf ’em down.  Oh. My. Gosh.  Tasty doesn’t even begin to say how tasty they were.  But they were very tasty.  Did I mention tasty?  Yes.  They were tasty. 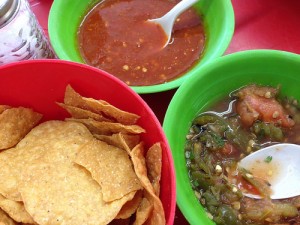 As I was finishing up my first taco, the strolling musician came cruising through to the back of the little restaurant area with a cup held out in front of him.  Oh!  Tip time!  I stuck a dollar in his cup as he went by and then was struck by a thought… ok, just a bit behind the buck but hey, I was eating yummy tacos!  In my defense, my stomach was getting all the blood!  So as he was heading back out to the sidewalk, I motioned him over and said I wanted to take his photo and here’s another dollar.  Well, I’m not sure what my second dollar bought but he promptly sat down on the other side of me at my table and began to play his guitar in earnest! 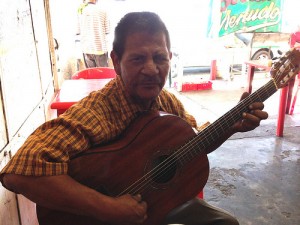 I got most of it on video and you can watch him play and sing, as well.  Since the camera was pointed into the bright light, the guitar-playing man is more or less in silhouette but you get the point.  It was very sweet of him.  Sure, he probably does this all day long but I enjoyed it immensely and that’s really all that counts, isn’t it?

The Guitar Man disappeared as soon as he was finished singing for me – I never saw him again.  Maybe all he needed was another two dollars before he was finished for the day, who knows!  In any event, he made my day with the tacos complete.

I’d go back there for tacos any day… anyone want to join me?

PS.  If you want to go on your own, Molcas Tacos is on B Street just west of Tercera.

9 thoughts on “Tacos and Frank Sinatra”