I've been a little melancholy this past week and I've been wondering why.  Then yesterday, I realized today would be my dad's birthday, and I knew why. 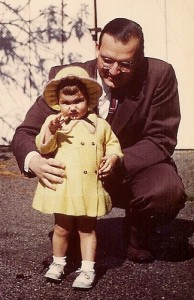 Even though I no longer carry that gut-wrenching anger I had at the time that was directed at my mother, brother and sister, I still find myself feeling sad every once in awhile.  I think it's because sometimes I just miss him.

Sometimes I just miss him.

So here we go… all together now…