A few years ago, the National Park Service collaborated with the states of Washington and Oregon to create a new park – the Lewis and Clark National Historical Park.  This new park encompasses numerous sites along the Columbia River and the Pacific Ocean coast in both states.

So here we are, Dinah Dog and me, at Fort Stevens for a couple of nights. 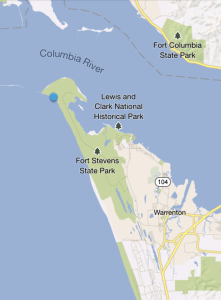 A nice, quiet campground in the very northwest tip of Oregon, on a converted military base that was actively protecting the coastline until 1947.  Fort Stevens is big, 3,800 acres big, making it one of the largest public campgrounds in the United States.  It boasts such attractions as a 100-year-old shipwreck, numerous wildlife viewing blinds, miles and miles of trails, both hiking and multi-use (so you can ride your bicycle, too), mushroom-hunting, clamming, and a fresh-water lake.  It also has many miles of coastline, both Pacific Ocean and Columbia River, where you can sit and watch the ships go by – ocean freighters as they leave the Pacific Ocean and sail over the “bar” into the Columbia River, bound for ports in Vancouver, WA and Portland, OR, or barges that travel up the river as far as Lewiston, ID.

We arrived late in the afternoon and stopped at the ranger station to register and get a campsite.  I knew from checking the availability the evening before that there were plenty of open sites and it would just be a matter of finding the right one for us.  Dinah Dog has a definite opinion on what our site has to have in the way of amenities and I aim to please her for as long as she’s with me.  <big smile>

We were greeted at an open window by a ranger named Debi Hill – a friendly, attentive, interested-in-finding-the-perfect-spot-for-you kind of ranger.  And boy, did she take care of us!  She asked some general questions like what are you traveling in and do you want shade or sun, and then gave us a site in E Loop – #144.  It just so happens that we got talking about some other stuff, including where to take dogs, like old dogs that don’t hike much anymore, and she back-tracked, saying now that she knew me a little, she had a better site for us than the one she assigned us.  So, sure enough, it was available for a couple of nights, and we were off, heading out to Loop E #159.  Well, not quite.  Somehow in the conversation, I mentioned that I geocached* and she started asking questions, thinking it sounded like something she might like to do with her boyfriend.  We chatted about geocaching until more customers/campers came in and she had to get back to work – I left Debi to help them out, and drove on down to Loop E. 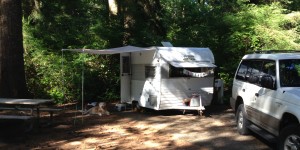 I backed Li’l Homey into #159 like I knew what I was doing or something, and got out of the car to start the setting up when I was attacked by a monster cloud of mosquitoes!  Quick!  Run and get the deet!  Okay.  All better now, although kind of stinky.  Set the trailer down, ramped Dinah out the back of the car, got her some dinner, and met my next-door neighbor on the left side.  A woman a few years older than I, she had just finished setting up her tent and came over to tell me what a great job I did backing the trailer in.  How nice of her to say something!  Joann is from Idaho and traveling down the coast of Oregon, before heading back home.  I meet the nicest people on the road!

Debi had recommended for us – she had highlighted them in yellow on the map she gave us.  We drove all the way out to the end of the point to a place on the Columbia River where it meets the Pacific Ocean; we sat and watched a cargo ship sail right on by us.   Along with a fishing boat or two and a couple of jet skis, there were more people on the water than on the beach.  We had the sand all to ourselves.  The temperature was pleasant but the wind was blowing a bit more than was easy to sit in, so we got back in the car and checked out some other beaches.

The Pacific Ocean beaches were just as windy but I stopped at the shipwreck  of the Peter Iredale that’s been there for a hundred years.  All that’s left is some of the iron infrastructure but it’s kind of neat, sticking up out of the sand – looks like a modern art sculpture.  Click here to see some pics – I couldn't get any decent ones with the sun shining as brightly as it was.

We left the park and drove to Warrenton, a

town near Fort Stevens, to stop at a market for some food provisions.  (All this Lewis and Clark stuff had me thinking I need to stock up on provisions for our trip!)

I headed back to our campsite, off-loaded the Dinah Dog, and met the neighbors on the other side of us – the wife came out to tell us they had been admiring my little trailer and she asked lots of questions about it, about living in it, about what I did with my time.  She and her husband are taking a month to drive down Highway 101, the very same highway that I just completed driving north on a couple of weeks ago.  They’re going to do some wine tasting in Paso Robles and take the “ghost tour” of the Queen Mary in Long Beach, before catching a boat out the the Channel Islands State Park.  I really do meet the nicest people on the road! 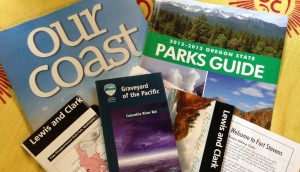 If you find yourself at Fort Stevens, stop in and see if Debi is working at the ranger station.  Tell her I sent you – you’ll have a wonderful conversation because she has to be the most amazing ranger ever!  She’ll really take care of you – just look at this pic of all the info stuff she found for me!

Thanks for coming along on our little trip to Fort Stevens.  I hope you get the chance to experience it for yourself someday!

*geocaching: I call it treasure-hunting with a hand-held GPS and a webpage.  Click here to check it out.