I woke up this morning and, as I usually do, I picked up my iPhone to check my Facebook page to see what was up with the rest of the world. FB was alive with the news that the United States Supreme Court had voted 5-4 to rule that "married same-sex couples were entitled to federal benefits and, by declining to decide a case from California, to effectively allow same-sex marriages there." Lots of rainbows and happy status lines, from both my gay and lesbian friends, and my straight friends.  And there was my son, Mark, with a link to the New York Times announcement about the US Supreme Court ruling.

The announcement prompted me to reflect back over the past 20+ years or so since Mark came home on leave from the Navy one day and announced to me that he was gay.  I'm not sure I handled it very well at the time, but I do know one thing – the only priority I have ever had since the day my son was born was his happiness – I wanted him to be happy, no matter what he did.  I wanted him to have as many experiences as he possibly could that had been denied to me, whether because I grew up in a family where money was always tight, or because I was a girl, or because my family was "very religious" or for whatever reason.  Who he was, what he decided to do with his life, what he wanted to be "when he grew up" didn't matter as much to me; I just wanted him to be happy with whatever he chose. 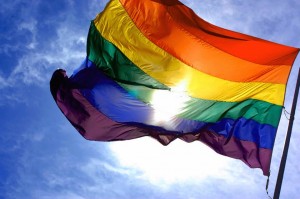 Since that "announcement day," a couple of memories stand out in my mind.  Among them is a night at a hockey game at the Rose Garden Arena in Portland (I had season tickets to the games and shared the four seats with Mark and whoever else we could find to come along with us).  During the games, one of the things they do during the 20-minute break between periods is play the "kiss me cam" – the overhead cameras scan the people sitting in the stands, looking for a likely man and woman sitting together who are then expected to kiss each other.  On this particular night, Mark had brought his then-boyfriend with him to the game and I was struck by the fact that, if I had been at the game with a man, the camera could have stopped on us, but because Mark and his boyfriend were two men, the camera would never stop on them.  As "the mom," I was deeply, incredibly saddened by this. I had realized in that moment that if I was out in public in with a man, it was acceptable for me to hold his hand, maybe even smooch him, but Mark and his boyfriend could not even put their arms around each other, let alone express any kind of affection for each other.  I was very sad.  Very sad.

Another thing that came to mind is this: part of my son's journey included a time when he denied his gay-ness to the outside world.  What he did during this time to do that is his story and he can tell it – what I want to tell is a little bit of my side of that story.  Since he was not out to most of his friends and family (except me), I was also not out.  For about ten years, I fielded many conversations that went something like this: "Is Mark married?  Oh?  Why not?  Hasn't he found the right girl yet?  My niece/sister/daughter would be so perfect for him! When can we get them together?"  I learned to avoid many situations and lots of the people who might ask me questions about Mark that I couldn't answer because he had asked me not to.  After several years, I began to pray that he'd "get it figured" out so I could stop hiding, stop avoiding people.  It was a long, long ten years.  I was very happy when he decided it was okay for him to be out.  Because it let me be out, too.  (Don't forget, this is my story, not his, and these are my words, not necessarily his.)

The announcement this morning has left me more emotional than I thought it would.  I find myself choked up at the thought that a whole bunch of people can now be a little more who they are, who they were meant to be, because we, as people, are a little bit closer to accepting us all, people of Planet Earth, as who we are.  I'm incredibly happy that we are a little bit closer to allowing us to be who we are.  Incredibly happy.  In. Cred. Ibly. Happy.

Every step we take, big or small, in the direction of believing in the goodness of humankind is a step towards becoming the loving bunch of people I know we are.

"Today we are one step closer to creating the beloved community."  — Rev. Deborah L. Johnson

Thank you, Mark, for allowing me to be a part of your journey, to share your path, to enjoy seeing the man you've become, to be your mom.  We've had one wild ride together and I know it isn't over yet!  I love you! 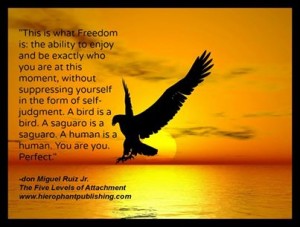 I guess I should tell Mark I stole his FB line… or maybe he'll just read about it here.