Traveling low to the ground doesn’t just mean that my little ten-footer is merely inches from the asphalt.  It also means that I travel the back roads and over-night in the rest stops.  And I eat dry cereal.

I’ve never been a dry-cereal eater; in fact, I’ve never really been a breakfast-food-of-any-kind eater.  I don’t like eggs.  I’ve never been a fan of pancakes, although I’ve enjoyed a waffle or two, butter only, no syrup, please.  I do like crispy, very crispy, bacon.  And I like crispy, very crispy, hash browns or home-fried potatoes, no bell peppers.  But I can eat those things any time of day or night, not just at breakfast time.  What I really enjoy for breakfast is a real live, tasty spicy, gloriously hot, chili burger.  I’ve been known to eat a big, huge bean and cheese burrito.  Or just give me a big, ol’ green salad.  That’s breakfast food to me! 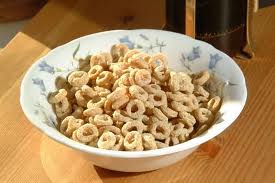 So back to being low to the ground and eating breakfast.  I’ve learned to eat dry cereal because it’s portable and easy to store.  It doesn’t require refrigeration and it can be eaten straight out of the box in a pinch, like as a snack food, even.  Sure, it’s expensive, but buying a huge box of a generic brand is as good as the name brands and costs half as much.  Of course, I really don’t know if it’s as tasty or not, because, as I’ve already mentioned, I’ve never really eaten dry cereal so I have nothing to compare with.

Okay, I have to mention this here as a way of coming clean: I used to buy a box of Coco Puffs about once a year and eat the whole thing in one or two sittings, covered completely with that good ol’ cooked white stuff called milk, because there’s just nothing quite like eating a box of crunchy, chocolate-y, pea-shaped little balls to get your day started off right.  Except that I didn’t eat them for breakfast… <insert big grin here>  I ate the Coco Puffs as soon as I bought them.

Since we’re talking about breakfast on the road, it helps to keep an open mind since truthfully, anything edible can be a breakfast food. 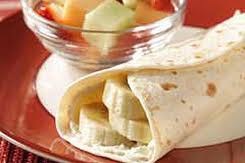 Breakfast is simply the act of eating something after a long night’s absence from food while we sleep – it’s the breaking of the night-long fast.  That makes eating just about anything that’s laying around the kitchen a doable proposition.  Breakfast can be last night’s left-over Chinese.  Or how about eating a peanut butter and jelly sandwich?  Or a bowl of ramen noodles with some veggies thrown in.  Or make a fruit burrito with whatever fruit you have lying around.  Eating gets the innards working again after a night’s rest and allows our bodies to process the food we put in it as fuel for the day’s activities.

I’ve changed my eating habits over the years and now I eat as vegan-ly as possible. 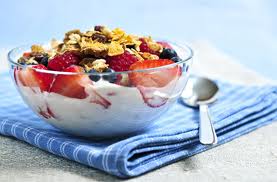 If I’m on the road, without access to a cooking device, I pour almond milk (stored in the ice chest) on my bran flakes with some toasted shredded wheats thrown on top.  I might even toss in some raw walnuts or almonds, too, along with a handful of coconut flakes and dried blueberries.  Use your imagination and look in your cupboard and fridge – I’ll bet you can come up with some tasty mixture, too, that you never even thought of.

If there’s a stove handy, I might whip up some of those pancakes I never really liked (see paragraph 2 above). 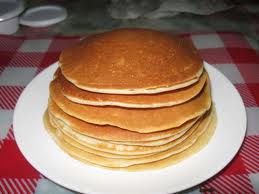 Make them with some canned, cooked pumpkin and cinnamon, and they are tasty, indeed!  Or I can cook up some rice, top it with some of that almond milk, a dash of cinnamon and a spoonful of maple syrup, (the real stuff – my personal favorite is the Grade B syrup, if I can find it), and I’ve got a taste-treat made in heaven!

Breakfast on the road doesn’t have to be boring – it can be a delightful mix of traditional morning foods and things that we typically eat at other times of the day.  Even breakfast eaten at home can be an exercise in trying new things, in broadening our horizons, in eating pizza for breakfast.  Try it – you just might like it!

And as for traveling low to the ground, I love it!  I’ll even eat cereal…

6 thoughts on “Breakfast on the Road”