For as long as I can remember, I’ve been saying that I wanted to fly to Paris for breakfast and fly home.  Just like that.  Fly.  Paris.  Breakfast.  Fly.  Home.

So a few years ago, I decided it was time to go.  This is the short version of the story.

I pulled up kayak.com on my computer, located a cheap flight… and bought the ticket.

A couple weeks later, I asked my son to take me to the airport in 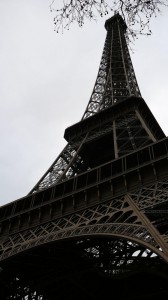 Portland, Oregon (my flight out was about 10 AM on a Friday morning in January), and then come back and get me two days later on Sunday morning.  I didn’t even tell him where I was going –  I said I’d send a pic from my phone of something he would recognize once I got where I was going, and he could figure it out.

The flight from Portland to Paris, including a lay-over and the time-difference, landed me in Paris early on Saturday morning.

If you’ve ever been to Europe, you know they don’t really eat what we consider to be breakfast here in the US, so my breakfast in Paris was going to have to be lunch instead, but what the hay, it was a meal. Breakfast. Lunch. Who’s counting?

I took the airport shuttle bus over to the RER train station and rode into town, exiting near Notre Dame where I started my 33-hour adventure in Paris (24 hours + 9-hour time difference).

I’d never really wanted to go to Paris, or even France, so I had had to do some research to figure out 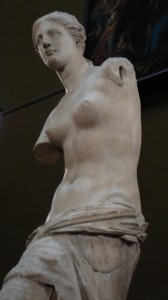 what I was going to fill up my time with while I was there for the day. I planned out a route that included stops at Notre Dame Cathedral (twice – I was there for morning bells and back again for evening bells), The Louvre (to see the Mona Lisa, the Winged Mercury, the Code of Hammurabi, the Venus de Milo), the Sainte Chappelle (amazingly beautiful stained glass windows), the Eiffel Tower, the open street markets on rue Cler, Arc de Triomphe with the Tomb of the Unknown Soldier and Eternal Flame, Champs-Elysées (in January, Paris shops are all having les soldes or sales), and roaming through the Left Bank; walking along the Seine; standing on Point Zero, the Center of Paris.

When I was ready to stop for lunch (after all, it was the whole reason I was there), I was on my way to the Eiffel Tower.  As I crossed the street, I saw this cute little cafe, looking very French, whatever that is, called Le Champs de Mars Bistrot.  I had the coq au vin (chicken cooked in wine), which was the special of the day, followed up with crème brûlée and a double espresso.  Oh, I how love crème brûlée!  Yum!  Double yum!  (A large Irish Setter dog sat next to me for the entire time, with his head on my lap; 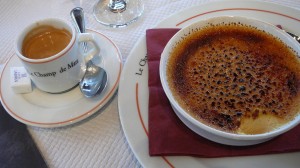 well, that is, until a little girl came in with her parents and then the dog was gone – he loved that little girl!)  Contrary to what I’d heard about French waiters, mine was polite and gracious, and although I’m sure I butchered the little bit of French I knew, I got what I ordered, and it was all really tasty!

In addition to lunch, as I wandered through Paris, I found some other delicious Parisian foods: pain au chocolat (chocolate-filled croissant) fresh from the oven, Madeleines (little sweet sponge cakes in the shape of a shell), crêpe jambon fromage (ham and cheese crepes) made at a little crêperie sidewalk stand located on a street in the Left Bank.

I made my way back to the airport very early Sunday morning, or very late Saturday night, depends on what you want to call it. 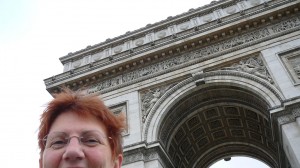 (I missed my train connection and ended up way the heck out on the edge of Paris somewhere; a young couple heading home from a long, late night on the town helped me figure out how to get back to where I was supposed to be, even though they didn’t speak English and I didn’t speak French.  Amazing what a little game of charades in the middle of a deserted train station in the middle of the night will get you!)  Arriving several hours before my plane was to depart gave me time for a little cat-nap on a bench, and after the snooze, I flew back to Portland with a crazy story to tell about my breakfast in Paris.

What a hoot!  I’d do it all again in a heartbeat… and maybe I will!  Who wants to go with me?

Want to see all my pics from that trip? CLICK HERE for the camera pics (the pain au chocolat, the dog in the restaurant, the Winged Mercury, Notre Dame Cathedral, me at Point Zero, and more!) and CLICK HERE for the four pics I took with my cell phone to send to my son so he could see where I was (he figured it out before he got the first pic!).

13 thoughts on “Breakfast in Paris”