I first met Louise 10 years ago.  She was one half of the cutest duo you could ever have imagined – two little black and white kittens, almost identical sisters, both of them sitting in a single too-small crate, waiting for someone to come adopt them at a “rescued animal fair” at a local car dealership.  I had been looking for a buddy

for my Max Cat because I thought he needed someone to accompany him in his cat-scapades and because having just one cat in the house didn’t seem right, somehow.  Little did I know.

I ended up taking them both home with me… how could I pick one over the other?  I just couldn’t do it.

I named the two girls Thelma and Louise – ‘cuz they were hell on wheels.  So, what else could I do?  What else would I name them?  They were 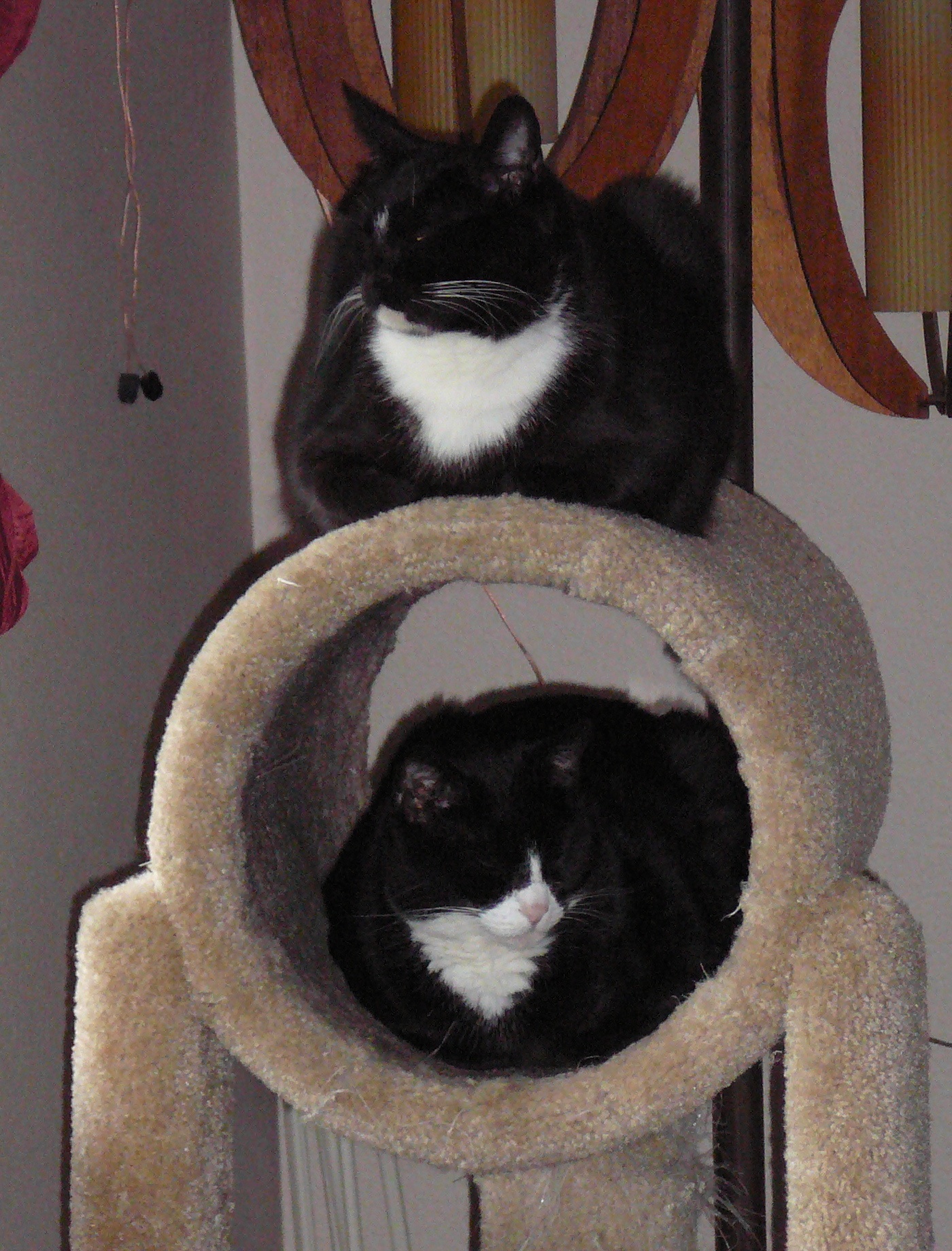 inseparable, sleeping together, eating together, running around the house together.  Max kind of ignored them most of the time, although every once in awhile, he played his role as the “big brother” and would chase them down the hallway into the bedroom and under the bed, where they’d hide out, waiting for him to forget that he’d chased them there in the first place.  It usually didn’t take very long before they were back out in the living room, cuddled up in their “cat tree” or sleeping on the sofa.  Life was good.

Our lives soon changed dramatically.  My house foreclosed and the bank took it back, leaving the three cats, Dinah Dog, our big, ol’ Golden Retriever, and me out of a home and out on the street. 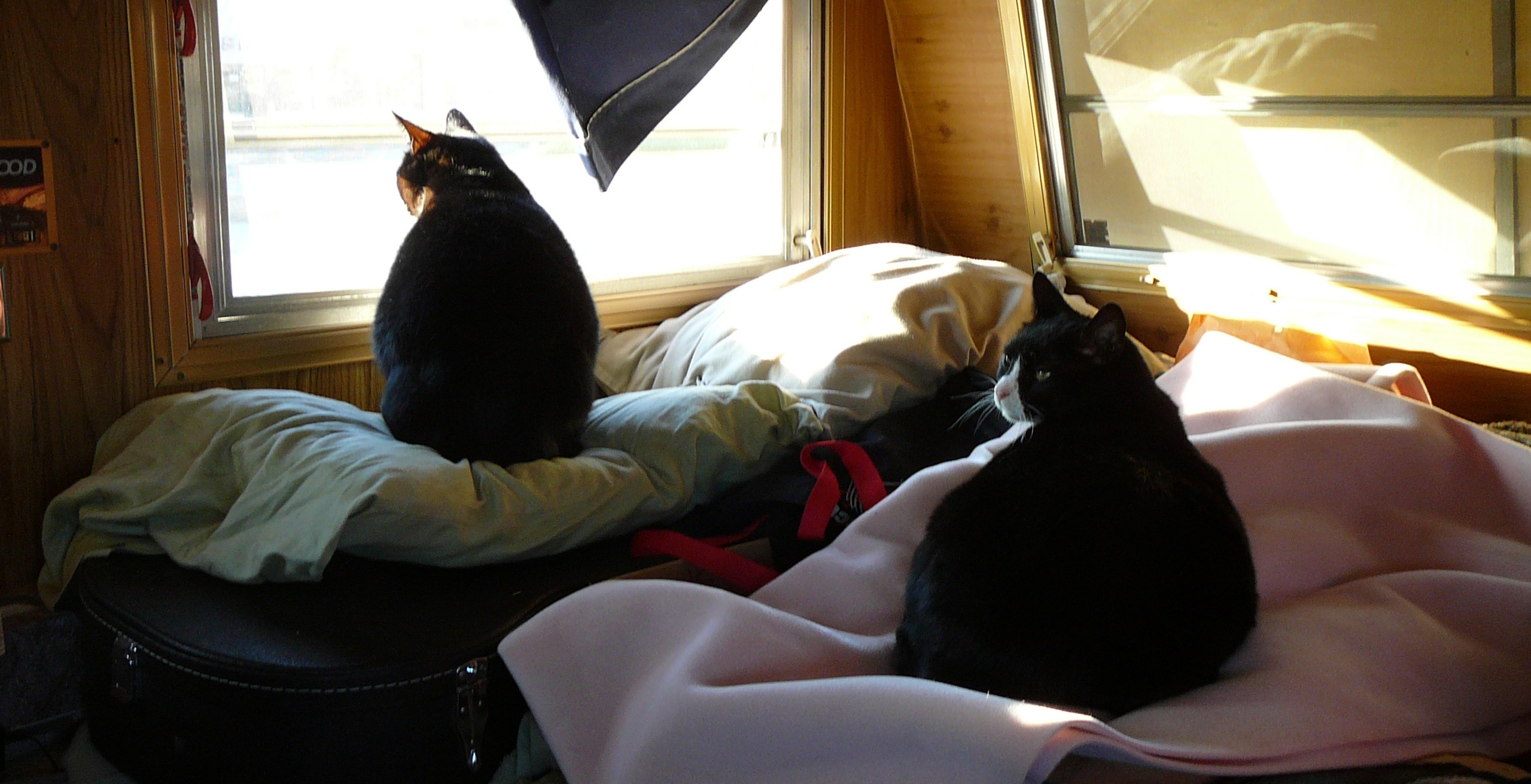 Some friends in Oregon offered their sofa and a place to stay (thank you!), and I eventually bought a small trailer, loaded everyone into it, and took off, heading south.

Along the way, Max decided it was time to leave his life here on Planet Earth and Thelma followed close behind him ten days later.  Having both of them suddenly, unexpectedly leave us was a shock to our system, our little family unit.  Without us requesting it, we were now three – a dog, a cat, and their person. 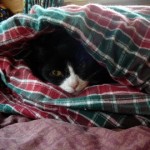 When Thelma died, I was concerned that Louise wouldn’t be able to adjust to being without her.  I had always called Louise my “watcher cat” because she stayed in the background watching everything and everyone, sitting in the doorway, keeping an eye on all of us in the living room, acting as if she didn’t want to join us.  She didn’t allow anyone to pet her, and ran away if you tried to get close.  You might be able to touch her tail as she was eating but as soon as she caught on that you were touching her, she jumped and ran. 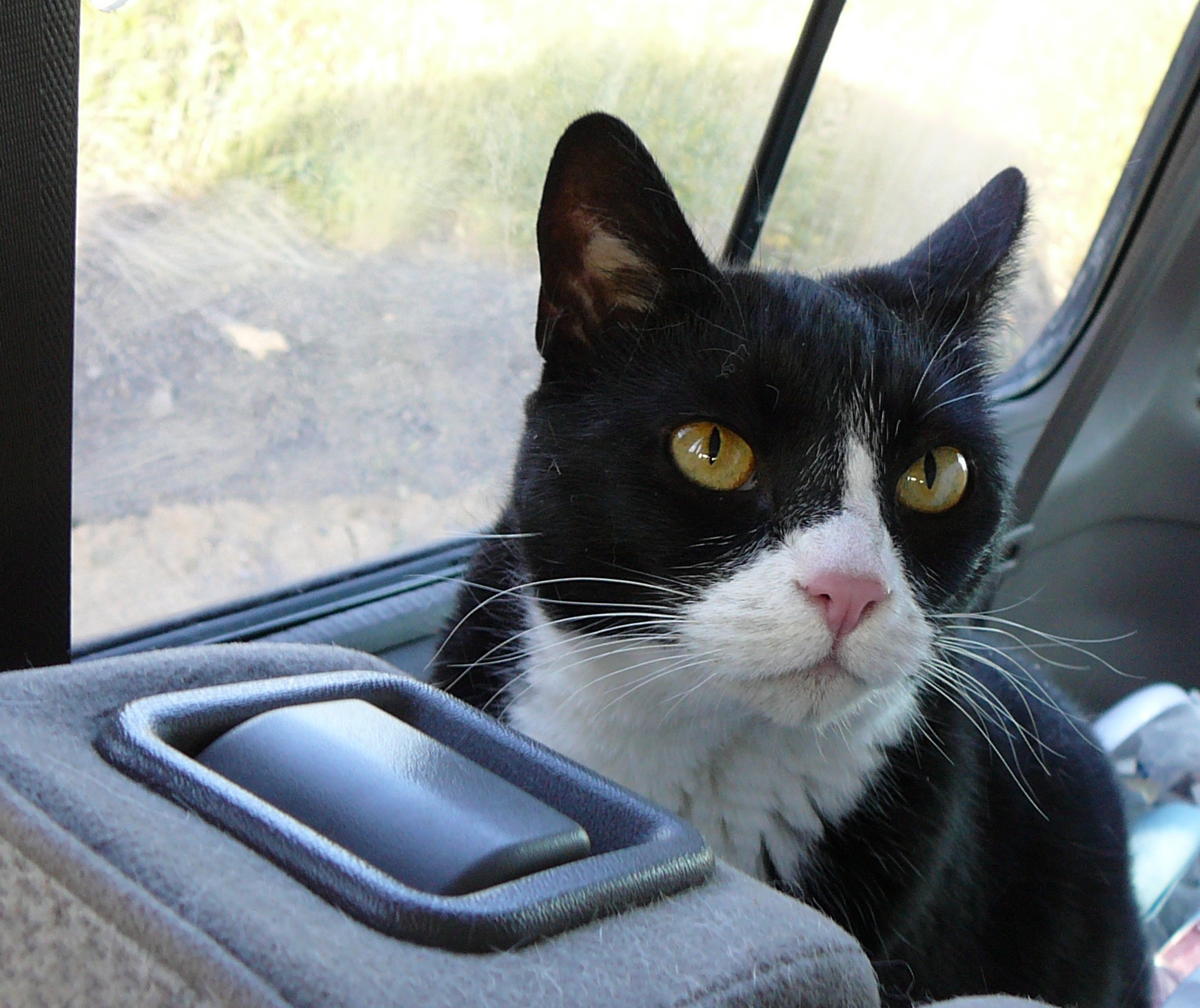 What she did when left on her own without her sister astounded me.  She moved into her job as the Main Cat of the House as if she had been chosen special for the position, which, I suppose, is exactly what happened.  She no longer stood in the background and watched the activities; she participated.  Kind of.  Oh sure, she still took a few moments to warm up to new people but once she did, you had a friend for life.  I needn’t have worried about her a bit – she loved her life as “the cat” and we, Dinah and I, welcomed her as the third member of our little trio.

Over the next several years, the three of us traveled many miles together, spending weeks here 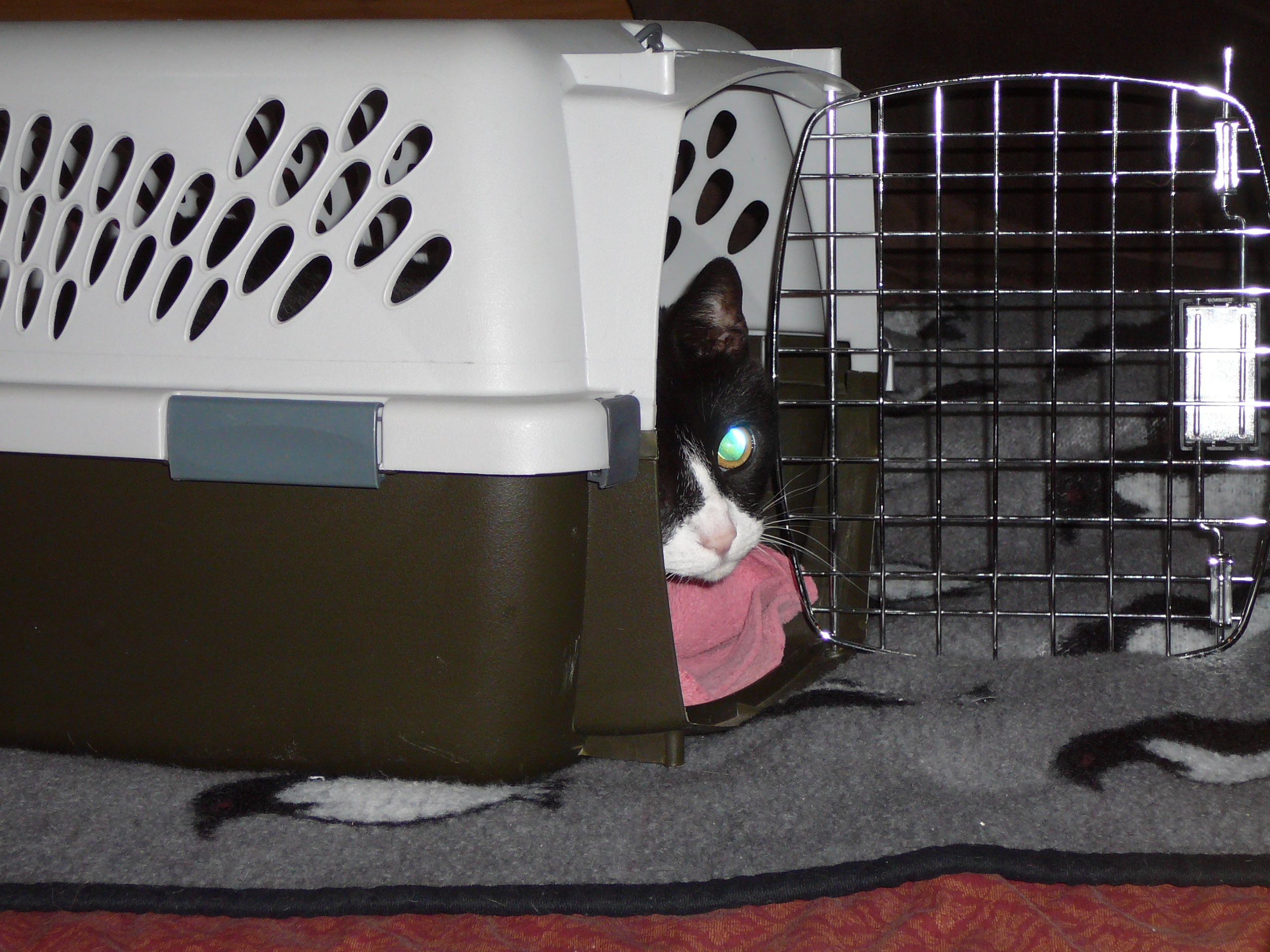 and days there, months in San Diego and months in the Pacific Northwest, visiting old friends in New Mexico and new friends anywhere we could find them.  We saw new sights and ate new foods; well, ok, Dinah and Louise ate their same, normal dog food and cat food but it was in a different location every few months or so – I was the one who got to eat new foods.

I know most cats don’t like to travel – at least, none of the kitties I’ve ever had did – but Louise seemed to love it.  She had her own favorite places to hang out in the car – on blankets I piled high on the passenger seat so she could look out at the landscape 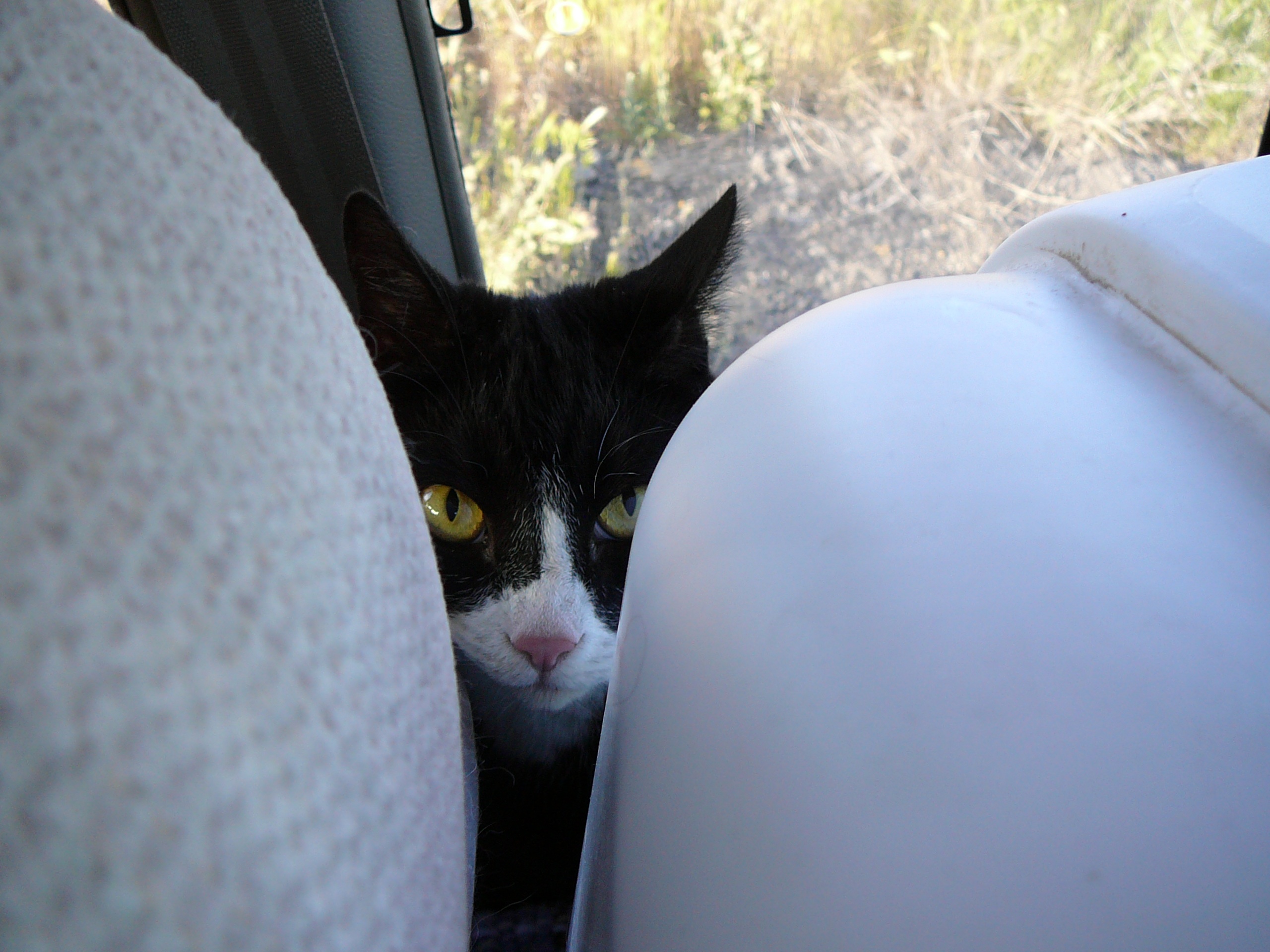 flying by the window (she especially liked to do this at night), in the cat box sitting on the floor behind the front seat (I covered the litter with a plastic bag and an old throw rug; otherwise, yuck!), in the “way back” with Dinah where she could nuzzle up with her big fluffy Golden.  She never tried to get out of the car; I think she was content to stay inside where the food and litter box was.  At least, she had her priorities straight!

Her favorite thing to do when we stopped some place for the night (other than commandeer the bed, of course) 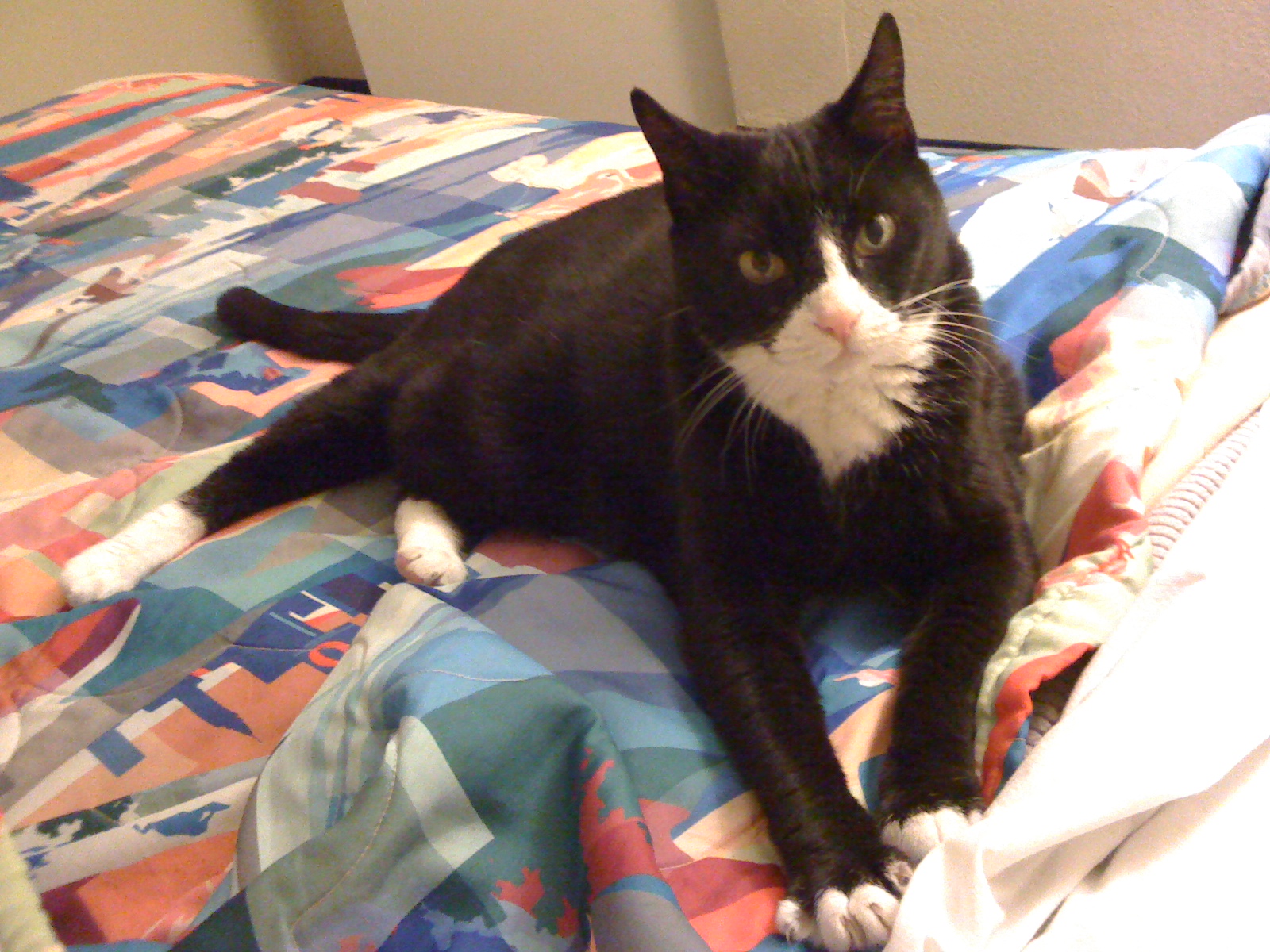 was to chase one of those little laser beams – she would run back and forth in the trailer, or mess up the blankets on the bed, just trying to catch that teeny tiny red light.  And I know she always thought the next time she jumped on it would be the time she caught it!  What a silly kitty, thinking she was actually going to catch that bouncing red speck! 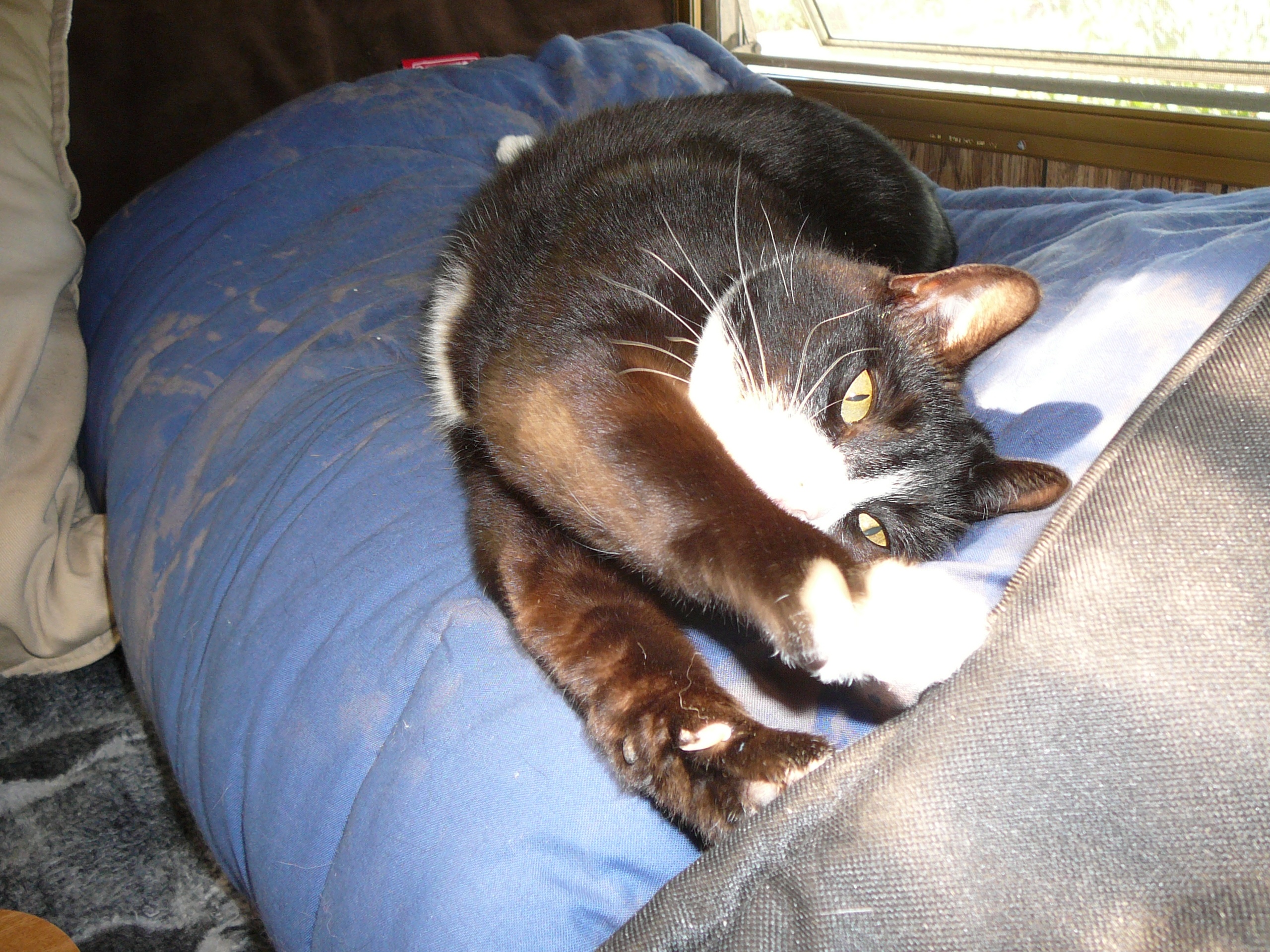 She loved to be brushed with Dinah’s dog brush which made me wonder if she might have thought she was part dog.  Perhaps that was what was behind her sitting back and watching everyone – there were too many cats and she wanted to be a dog!  So, instead, she incorporated some of both into who she was – chasing laser beams and being dog-brushed were just two examples of her cross-species behaviors.  She was a funny, funny girl.

And, oh, did that girl enjoy her catnip or what!  She loved the big, tall plants I grew for the cats 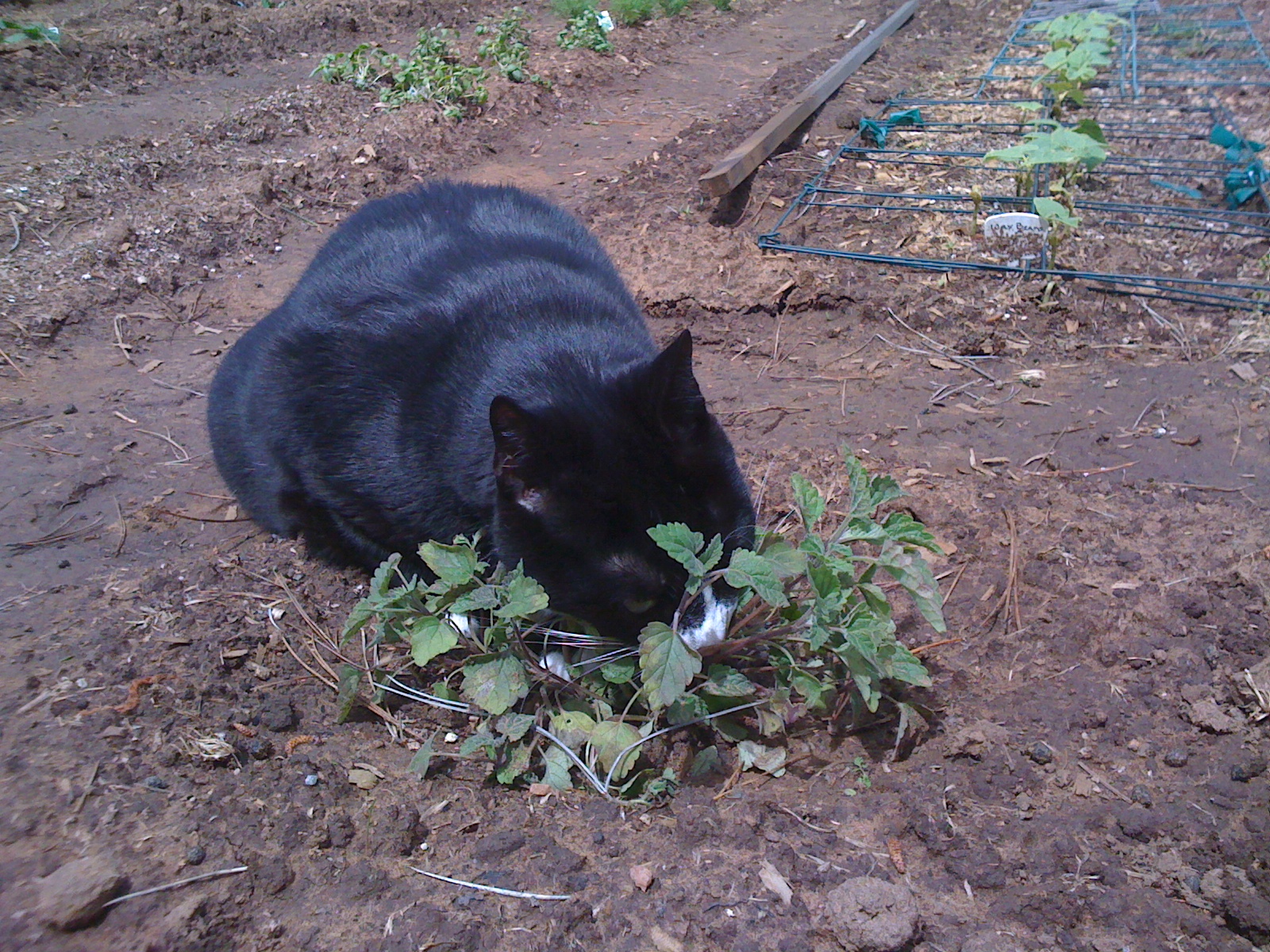 when we were back in Washington, hiding out where she thought I couldn’t see her, and when I planted a small pot of the ‘nip for her in a friend’s garden in San Diego, she’d munch the leaves off and 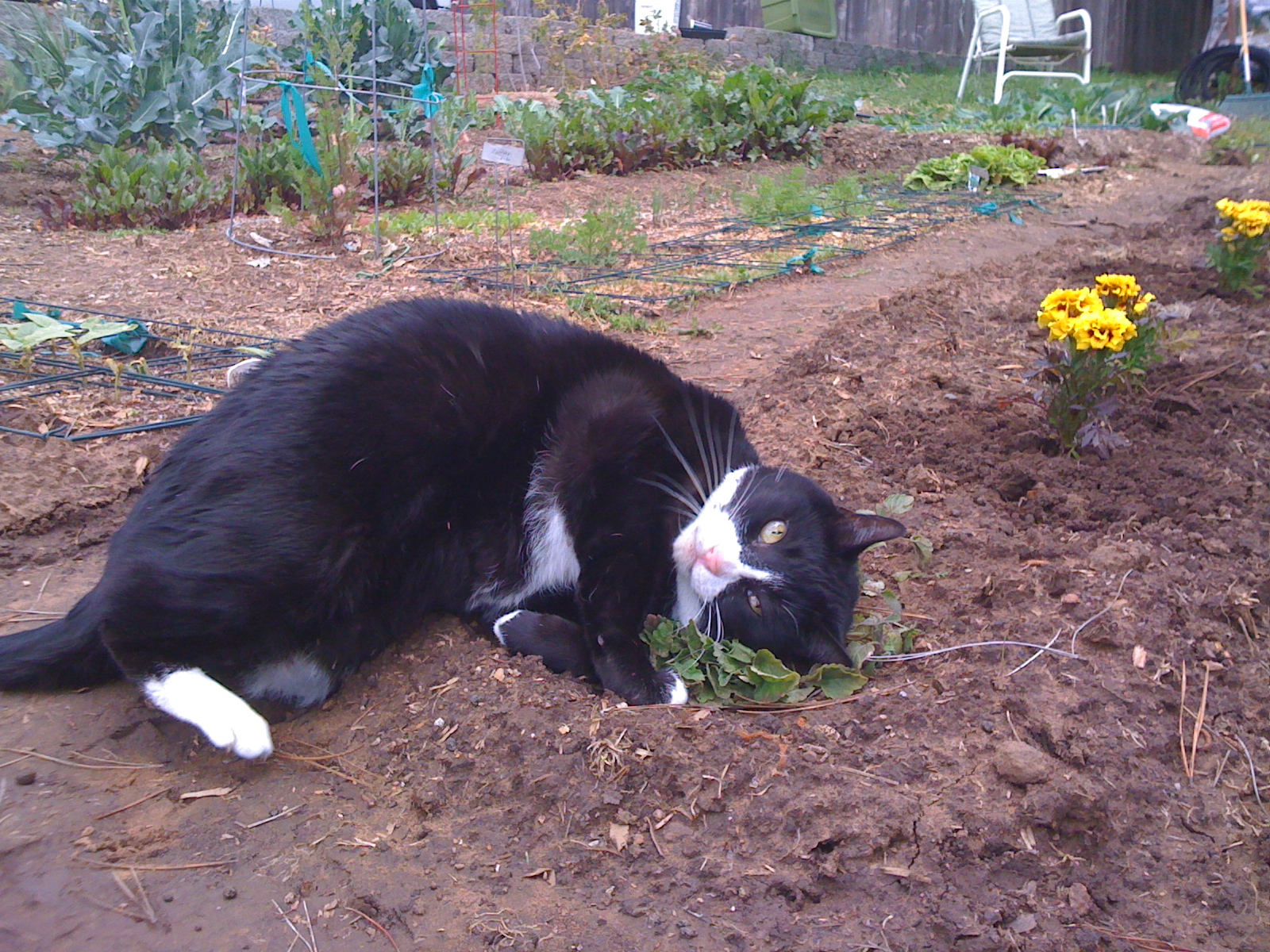 roll on the plant till it looked like it was dead and would never come back!  When we didn’t have a living plant nearby, I’d put a handful of dried catnip on her scratcher, where 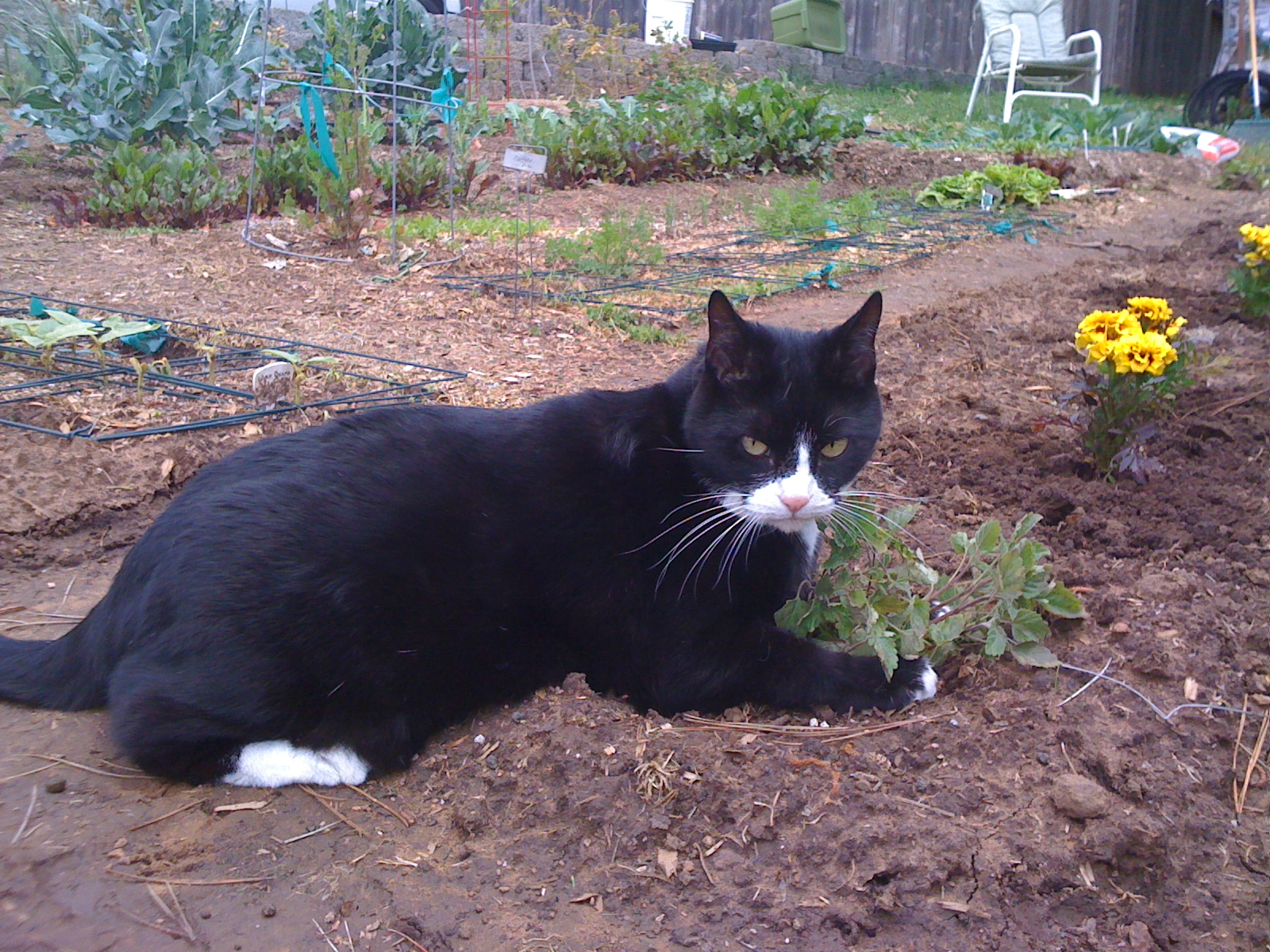 she rubbed and rolled and munched until she was silly and giddy and delightfully spacey.  What fun it was to watch her with her catnip!

Louise, I know you and Thelma are together again, and the two of you are running free, chasing butterflies, rolling in the catnip, napping in the sun.  I know Max is right there with you, as well as so many others you’ve known during your time here; and, if time were present where you are, I’d say you were making new friends every minute, because I know there are lots of others who share your space with you.  I miss your zaniness, your big, huge purr-motor that turned on at the slightest touch of my hand, your playfulness when we stopped for the night, your warmth as you curled up with me under the blankets, your peacefulness as you napped next to me on the sofa, and I take with me the joy and happiness you brought me during our ten years together.  The fact that you left us during the Transit of Venus will forever be with me as part of our amazing journey together.  Wow, girlie, you really rocked that one, didn’t you?

To you, Louise, and to all the lovely animals I’ve known and shared my presence with here on Planet Earth, I raise a toast to your wonderfully magnificent beings and I carry your spirits with me everywhere I go.  Till we meet again… 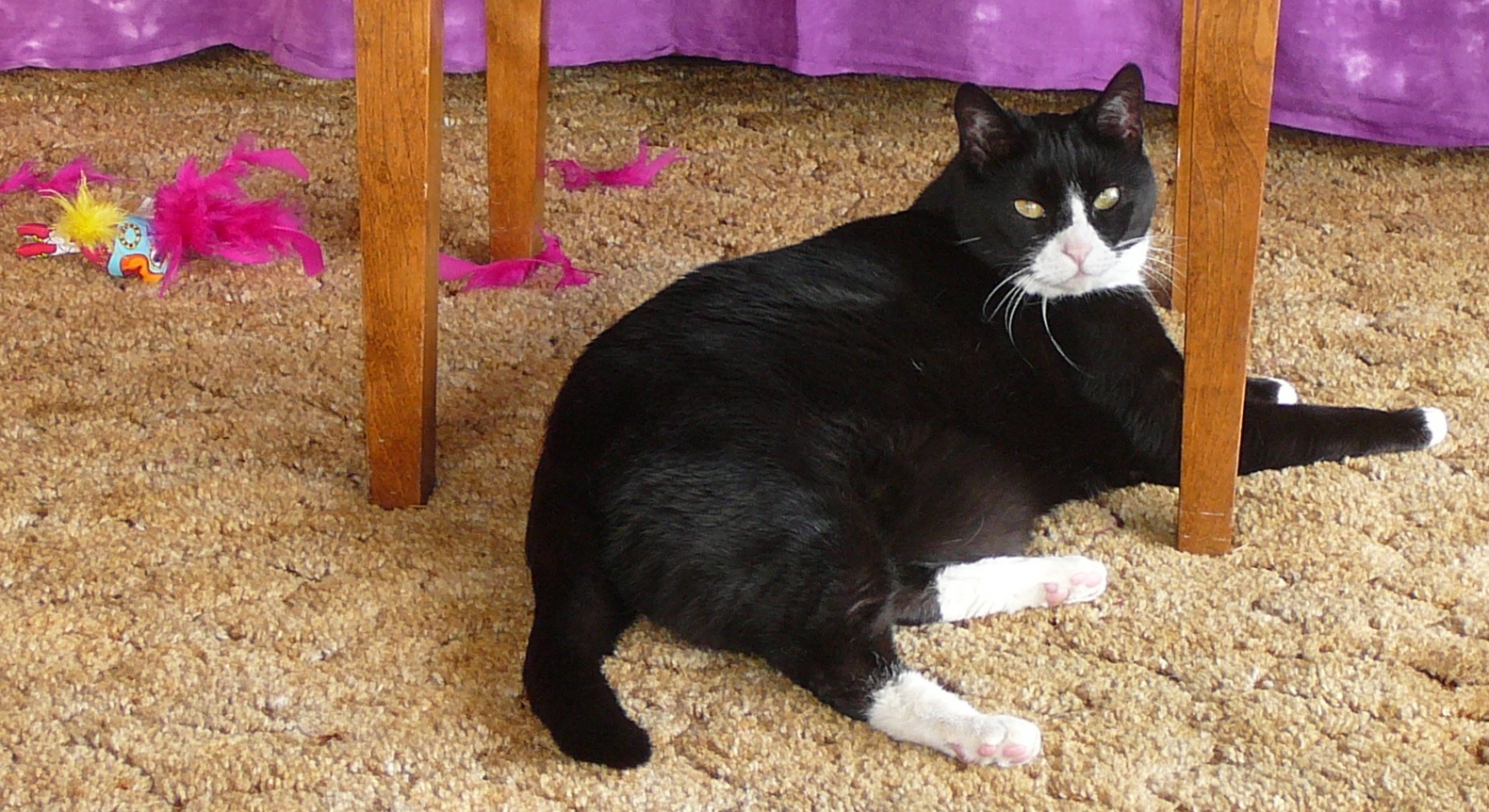 9 thoughts on “A Tribute to Louise the Cat, My Intrepid Traveler”