The last time I posted, my little 19-footer was on the market and waiting for its new home, its new adventure, the next chapter in its own story.  Since that posting, the little guy has moved on, starting its new li 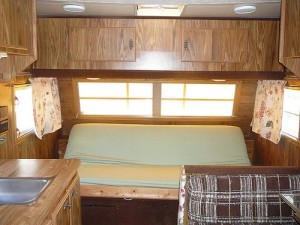 fe as a home for a young man who’s in the Navy, needing a place to live until his wife and two toddlers can join him in his new duty station at Coronado in San Diego, California.  This is the blow by blow full accounting of the Wilderness travel trailer during its final days in Vista, California:

Within hours of posting the sale, I had several emails, all wanting me to call them back immediately to arrange an appointment to see the trailer.  I called the first responder, who said his name was Eric.  In the craigslist ad, I had posted 46 photos as well as an extensive and comprehensive description because I didn’t want to waste my time with lookie-loos – I didn’t really expect a lot of questions from people wanting to see the trailer.  Eric fell right into that “no-questions” category since he didn’t have very many, then told me his wife was the decision-maker and she’d be over to look at the trailer between nine and ten the next morning.  I called the next couple of interested people and lined them up with appointments for the next day, cautioning them to call me first to make sure it had not been sold before they got here.

The next morning, Eric’s wife not only didn’t call to tell me she was on the way, she didn’t just show up either.  I had emailed the address to Eric, along with a link to the Google map showing the location so she knew where I was located.  Well, no call, no wife, so I reached for my phone to call the next people in line… and, guess what, she called!  We made arrangements for her to come up right away, since I had others who were coming shortly after, and she headed out, knowing that it’d take about 45 minutes for her to get here.

In the meantime, I did call the next people in line, who were interested in buying the trailer “sight unseen” and were heading to an ATM to get the money right then!  I told them to call me back in an hour to make sure Eric’s wife didn’t buy it and went back to waiting for the wife.

Eric’s wife, whose name was Nicole, finally arrived, towing along two youngsters, almost 2 and 4-1/2, and a friend with a baby in arms.  Nicole seemed frazzled; she was unfriendly, unsmiling, distracted.  After looking inside the trailer for about 30 seconds, she said she wanted it – turns out, they’d been looking at “lots of trailers for twice as much money in far worse shape.”  She didn’t have the cash on her, even thought the ad said “cash only,” so I said I’d take a deposit and told her how much I wanted, and that the deposit would be forfeited if they didn’t come back with the balance by the next afternoon.  She agreed, except she didn’t have enough for the small deposit I was asking for (who comes to buy a cash-only trailer, especially after all the looking they’d done, without any money?).  She then told me what the trailer was for and I copped to the Navy family thing, saying my son had been a sailor, and accepted what she had as a deposit, wrote up a receipt and waved good-bye to the kids.

While Nicole and I were talking, the second people in line called me no less than three times, hoping that Nicole didn’t want the trailer because they had cash in their hands and were ready to tow it away that day!  They were very disappointed when I said she had placed a deposit on it and would pick it up the next day but they wanted to come see it anyway.  They arrived an hour later, ooo’d and ah’d over the little 19-footer, and hoped that Eric and Nicole would default on the deposit so they could come back and get it – it had just never occurred to me that so many people would want the trailer!

Eric called the next afternoon to say his truck had broken a brake line and he needed to repair it before he could come get the trailer.  He called a couple more times during the afternoon but he finall

y arrived – he’d never owned a travel trailer so we spent a couple hours going over everything we could and then we set about getting the trailer hooked up.  He was grinning from ear to ear as he drove away in the late afternoon sun, looking forward to his new adventure, his new home-away-from-home, his family’s new fun-times.

I took a couple of photos of the 19 as it followed along behind Eric’s Suburban, as he waved good-bye going down the lane.  The space next to the garage where it’s been sitting for the last two and a half years looks bare but it’s full of the promise of new things to come for the people who own the property – they’ll be felling the trees that provided shade for me in the summer, and

putting in a paver walkway, and maybe some other planting project or property upgrade.

It’s been an interesting adventure for us (me, Dinah Dog, and Louise the Cat) here in North San Diego County but I’m so excited about the new things in store for us – we’ve got a 10-foot vintage travel trailer that we’re going to live in while we roam around North America for the next whatever amount of time.  The little home-away-from-home is waiting for us at the workshop of some friends up in Oregon; I’ll be doing some spiffing up, cleaning up, replacing the propane tank and “house” battery, maybe doing some painting and other upgrades (like a new portapotty!), and then we’ll pile all our stuff in it and head on out.

I don’t know where we’re going or how long it’s going to take us to get there but I know we’re going to have fun, finding new things to see, new foods to eat, and new friends to make.  If you’re out there somewhere and want to meet up, please let me know where you are!  We’d love to see you and share our journey with you.

Happy trails!  Or is that Happy Trailers?!  Oh Yeah!!!